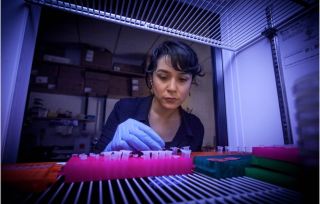 Betül Kaçar in her lab at the University of Arizona.
(Image: © Betül Kacar)

A team of scientists from the University of Arizona have engineered an instant replay switch for evolution. The technique, known as ancestral gene resurrection, inserts ancient genes into modern E. coli bacteria. It gives researchers the opportunity to watch evolution unfold again and again, providing insights into how life evolved on early Earth, and what it might potentially look like on other planets.

"Organisms can function just fine even when they've been engineered with an essential gene that is over 700 million years old," the study's lead author Betül Kaçar, an astrobiologist at the University of Arizona, tells Astrobiology Magazine. "This work is a proof of concept. The next questions are: How far back can we go? And would we expect the sequences to evolve and function the same way that they did? Just because sequences are similar doesn't mean that the gene will function in the same way."

Kaçar and colleagues published their work in the Journal of Molecular Evolution.

In 1989, famous evolutionary biologist Stephan J. Gould proposed a thought experiment: if you could rewind time and let evolution happen all over again, would the end result resemble life on Earth as we know it? For decades, the idea of "replaying life's tape" remained purely a theoretical question and fodder for endless debates among scientists. At the heart of the debate is the tension between chance and determinism in trying to understand how an organism's past constrained its future. [Photos: Earth's Most Ancient Organisms]

The development of recombinant DNA technology – taking a gene from one organism and inserting it into the genome of another – began to provide opportunities for researchers to answer Gould's question experimentally. Kaçar worked with her postdoctoral advisor Eric Gaucher at Georgia Tech on a NASA-funded project to replay evolution again and again with the laboratory workhorse bacterium E. coli. Kaçar wouldn't be evolving E. coli from scratch, but rather rewinding the evolution of a specific key protein that the bacteria needed to survive.

An ancient tool for building proteins

In 2008, Kaçar reconstructed the 500-million-year-old sequence of an important bacterial gene called Elongation Factor-Tu (EF-Tu), which helps to string together amino acid building blocks into fully formed proteins. This version of EF-Tu emerged just after the Cambrian explosion, when life began growing ever more complex. As a ribosomal protein, it sat at the heart of the cell, which depended upon the functioning of this protein for its very survival.

The ancient EF-Tu gene differed from its modern counterpart in E. coli at 28 spots. Since these bacteria can't survive without EF-Tu, Kaçar's first task was to see if the archaic gene could even function in modern E. coli. She replaced the bacterium's two copies of EF-Tu with a single ancient version and waited.

"The gene was like Rip Van Winkle – it had to learn to adjust when everything around him had changed," Kaçar says.

The ancient-modern hybrid bacterium was able to grow, but its time travel came at the cost of a two-thirds drop in evolutionary fitness, as measured by the bacterium's growth rate. With this dramatic decline, Darwinian evolution could take the stage and start tinkering with the thousands of genes in the bacteria. Kaçar created six different populations of these hybrid bacteria and then let them grow in the lab for 2,000 generations. Each of these populations provided a potential new ending for evolution.

In all but one of Kaçar's populations of bacteria, the E. coli evolved with their interloper EF-Tu gene in an identical fashion. Rather than changing the EF-Tu gene itself, the cells increased the amount of EF-Tu protein they produced to cope with the reduced function. Of all of the millions of possible solutions that the bacteria could have found, they largely seemed to settle on the same one. Kaçar calls this increase in production of inferior proteins the "emergency response system" of an organism. Regardless of its simplicity, the change worked. Increasing the amount of the ancient EF-Tu protein helped to restore bacterial fitness.

But that doesn't mean that these are the only possible solutions to the problem. Kaçar began her experiments with only six different populations of E. coli. In the wild, natural selection would have been able to mold the descendants of millions of different organisms. Also, 2,000 generations are an evolutionary blink of an eye. Because all six lineages of bacteria happened upon this solution, Kaçar believes that increasing the amount of misfit protein might be a temporary measure until a better mutation comes along.

Kaçar has continued growing her lineages to see what evolution might come up with next. She has also begun performing similar experiments in cyanobacteria and proteins central to photosynthesis, including Rubisco, which transforms atmospheric carbon dioxide into glucose. Kaçar's work on Rubisco was previously covered here by Astrobiology Magazine.

The importance of this work, Kaçar says, isn't just relevant to life on this planet. Knowing how life is or isn't constrained by its starting materials could tell scientists a lot about what life might look like on other planets, she tells Astrobiology Magazine. Ancient gene resurrection may also tell scientists how life might adapt in the future to a shifting climate and other anthropogenic changes.

"This work will help us in understanding the limits of life by combining synthetic biology and evolutionary biology," she says. "In this way, we can approach wider problems in astrobiology concerning the distribution of life."