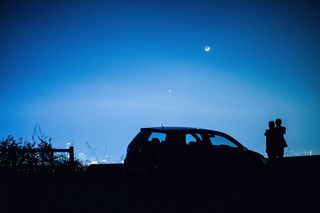 City lights outshine nearly every star in the night sky over Hong Kong, which is believed to be one of the most light-polluted cities on Earth.
(Image: © Lam Yik Fei/Getty)

Back in the mid-'70s during the summertime, several astronomy-minded friends and I would pile into my beat-up Chevy Impala and travel a couple hundred miles north of New York City up Interstate 87 to Warrensburg, New York. Not far from there was a campsite where we would spend time with our telescopes, observing the dark, star-spangled skies of the Adirondacks. Of course, other campers always gravitated to our campsite, where we enjoyed pointing out celestial sights and providing star-identification tips.

On one of those nights, a young woman asked me what was that "long cloud" that appeared to stretch across the sky each night from horizon to horizon. That "long cloud" was, of course, the Milky Way, which, under those very dark skies, appeared so bright that it actually cast a dim shadow. I asked her how it was that she didn't know its identity. She responded that this was her very first time away from home and that she had never camped outside before.

"Brooklyn" was her response. Hardly a place where one can see a dark, starry sky!

A sad commentary, perhaps, on one way that "progress" is stymieing our appreciation of nature. Indeed, no longer can residents in most metropolitan areas or even their nearby suburbs be treated to a view of our home galaxy, the Milky Way. And that's not the only celestial sight that is no longer available. [Gallery: 'Darkened Cities' by Thierry Cohen: Amazing Night Skies Imagined]

Back in 1996 and again in 1997, skywatchers around the world were treated to the sight of two magnificent naked-eye comets: Hyakutake and Hale-Bopp. From dark skies, both were accompanied by beautifully long, gossamer tails, but from urban areas, they appeared as little more than bright fuzz balls.

A side note here: I grew up in the Throgs Neck section of the Bronx, and during the 1960s, I could see quite a bit of the night sky from my backyard. But today, the city has gotten brighter. Much brighter. So bright, in fact, that now I can easily read a newspaper at night near my childhood stomping grounds without a flashlight. And the skies at my old Adirondack campsite have gotten noticeably brighter, too. What was once a sea of stars against a pitch-black background now looks more like a shade of charcoal gray.

Judging by the number of visible stars, my observations show that light pollution has made the night sky over Warrensburg, New York, about four times brighter since the mid-'70s. And at various points along the horizon, there are now small domes of light indicating the presence of nearby towns, the brightest of which is Lake George, a popular tourist center several miles to the south.

All of this can be traced to one thing: the curse of light pollution.

Light pollution is the excessive or misdirected outdoor lighting that is threatening to destroy virtually all casual stargazing. Throughout much of the United States, for instance, millions upon millions of precious watts are wasted because poorly designed streetlamps send a portion of their light into the sky. But it's not just stargazers who need to be concerned. While some may scoff at preserving the beauty of the night sky, there are other facets of light pollution that have a direct impact on all of us. Here are just a few examples:

Energy consumption:Joshua Filmer of Futurism.com reported in 2013 that at least 30 percent of street lighting is wasted — light that shines up into the sky, where it does no good. "Calculations show that 22,000 gigawatt-hours a year are wasted. At $0.10 per kilowatt-hour, the cost of that wasted energy is $2.2 billion a year," Filmer wrote. "That's 3.6 tons of coal or 12.9 million barrels of oil wasted every year to produce this lost light."

Wildlife:John Metcalfe at Citylab.com reported last year that lights are disorienting birds, with deadly results. "Many species migrate by night and are perilously dazzled by artificial illumination, for reasons we don't yet completely understand," Metcalfe wrote. "Lights on skyscrapers, airports, and stadiums draw birds into urban areas, where they smack into walls and windows or each other, or flap around and eventually perish from exhaustion-related complications."

Human health:According to an article published in the journal Environmental Health Perspectives, several studies over the past two decades have suggested that the modern practice of keeping our bodies exposed to artificial light at night increases cancer risk, especially for cancers that require hormones to grow, such as breast and prostate cancers.

Regarding energy consumption, the past five or six years have seen a slow transformation from garish, peach-colored, high-pressure sodium vapor streetlights — which have long been recognized to be energy-inefficient — to light-emitting diode (LED) streetlights, which use solid-state technology to convert electricity into light.

In contrast to old-fashioned incandescent light bulbs used in sodium vapor streetlights, LEDs do not possess filaments that burn out, nor do they get very warm. Because of their improved quality and lower cost, LEDs are now gradually replacing conventional streetlights for outdoor lighting in communities around the world. Good news, right?

According to the International Dark-Sky Association (IDA), "Outdoor lighting with high blue light content is more likely to contribute to light pollution because it has a significantly larger geographic reach than lighting with less blue light. Blue-rich white light sources are also known to increase glare and compromise human vision. And in natural settings, blue light at night has been shown to adversely affect wildlife behavior and reproduction."

Ways to correct this problem include the following:

That last suggestion seems to be of especially increasing concern. As an artifact of the lower costs of LEDs, many people are now unnecessarily illuminating places that they didn't bother to light before, like the outsides of buildings and other infrastructure, according to a study in the journal Science Advances.

What can you do?

The IDA, founded 30 years ago, gathers and disseminates light-pollution information and solutions. It has played a pivotal role in turning the tide in the light-pollution war. The IDA is winning over key sectors of the nonastronomical public — including government groups, sections of the lighting industry and electric utilities — arguing that good lighting for astronomers equals energy savings and more attractive surroundings for everyone else.

For more information on how to get involved, you can contact the IDA directly. (And to learn more about light pollution, you can also watch "Losing the Dark," a short planetarium show and video on light pollution produced by the IDA.)

You can also join thousands of other students, families, educators and citizen scientists by participating in an international event called "Globe at Night." This event, which is free to attend, is designed to observe and record how constellations appear from different locations, as a means of measuring the brightness of the sky at a variety of urban and rural sites.

Prospective observers can report their results online by comparing the number of stars seen in the night sky with a set of template images that depict the stars' visibility in varying levels of light pollution. Participation is open to anyone, anywhere in the world, who can get outside and look skyward.

Not convinced that extra lighting is a problem? Check out these nighttime satellite views of Earth, courtesy of NASA's Suomi NPP satellite. Additional images from Suomi NPP taken between 2010 and 2016 clearly show how light pollution is on the rise around the globe.

Lastly, you can do your part by learning more about light pollution and by taking steps to reduce extra nighttime lighting in your own town and backyard. In addition to letting you see the stars better, these steps may also save you money on electricity and help reduce the world's energy usage. Cities and towns that routinely put up ever-brighter lights for no reason other than "that's what we've always done" may think twice about spending the money if they hear just a few voices of opposition.

What are your town's lighting plans? Call your city or town hall today!

Remember, the night sky you save might be your own.