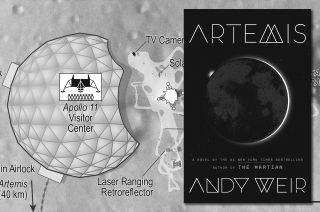 “The Martian” author Andy Weir sets his new novel, “Artemis,” on the moon, near the location of the first Apollo moon landing.
(Image: © Crown Publishing Group via collectSPACE.com)

About 115 years after NASA's historic Apollo 11 mission landed the first astronauts on the moon, tourists bound about "Tranquility Base" and stay at a commercial lunar base, at least as envisioned by the author of "The Martian" in his new book.

In "Artemis," Andy Weir's new novel out Tuesday (Nov. 14) from Crown, readers are launched on another riveting space adventure that is grounded in science, but this time it is wrapped around the tale of a crime and set at the first and only city on the moon. Like Weir's prior protagonist, Mark Watney in "The Martian," twenty-something Jasmine Bashara (aka "Jazz") finds herself facing mounting challenges — more than a few of her own creation — with a sharp wit and sense of humor.

"Artemis" is strictly fiction — the moon base by the same name is a construct for Weir's story, not his plan for SpaceX or other companies to bring to fruition — but it has touchstones in reality. In addition to figuring out the logistics and economics of the lunar city, Weir also calls back to NASA's Apollo missions, now approaching 50 years out in real life. [Making a Moon Base With 'Artemis' Author Andy Weir]

collectSPACE.com recently caught up with Weir via email for a spoiler-free chat about the references to Apollo in "Artemis."

collectSPACE (cS): You set Artemis, the commercial moon base, about 25 miles (40 kilometers) from the point where Neil Armstrong and Buzz Aldrin set down on the lunar surface on July 20, 1969. Did you know from the start that you wanted to locate Artemis near Tranquility Base?

Andy Weir (AW): I originally had the idea that it would be close to the Apollo 12 (not Apollo 11) landing site — because the terrain there is a good mix of lunar highland and lowlands, giving access to lots of different ores and minerals, which in turn would make construction [of the base] easier. Also, I was going to put the city in the shadow of a mountain in the area to minimize how much heat the city would build up.

But after more research, I found out that the heat wasn't a problem (the meter of sand inside Artemis's hulls serves as a fantastic insulator) and there was a bit of mixed terrain just as good near the Apollo 11 site.

Considering the historical significance of Apollo 11, and the fact Artemis's main draw is tourism, it was clear that the Moltke Foothills area was a much better place to put it.

cS: You describe the scene visitors to the "Apollo 11 Visitor Center" encounter at Tranquility Base. Did NASA's Lunar Reconnaissance Orbiter imagery showing the site from orbit help inform your mapping out the site? What (other) resources did you turn to, if any, to describe the condition of the site as left behind by Armstrong and Aldrin? [Book Review: Andy Weir's "Artemis" a Moon Colony Caper]

AW: The site is extremely well documented and filmed from the mission itself. Beyond that, I just made some assumptions based on what the thrust would have done to the site as the lunar module lifted off to return to Columbia (the command module in orbit).

I don't know for sure if the [American] flag is still standing or not, but it sure got knocked around pretty badly in the footage of the ascent that was filmed from the lunar module during takeoff. For the book, I decided it had been knocked over but it may still be standing in real life.

The moon has no weather, but it does have tremors and quakes every lunar morning and evening as the temperature changes cause the surface to expand and contract. So, thousands of little earthquakes (moonquakes?) will have worked away at the footprints.

cS: The Apollo 11 Visitor Center and its associated EVA (spacewalk) experience offered to its guests includes some precautions to make sure Tranquility Base is left undisturbed. This is a growing real-life concern for some, given the near future of commercial robotic lunar missions and the focus by several countries to return humans to the lunar surface.

Several years ago, NASA went so far as to release suggested guidelines for the protection of the Apollo heritage sites. Did you reference those recommendations in developing the visitor center for Artemis? Do you think such an approach would be practical in real life?

AW: I didn't actually read NASA's guidelines. I just came up with some of my own.

But I do believe it will be very well-protected in a future where there are humans living on the moon. It's a landmark of great importance, and one of the main tourist attractions that fuels the economy of Artemis. You can bet they will protect it very diligently, in the same way we protect Plymouth Rock and the Liberty Bell in the U.S.

cS: You name each of the Artemis domes after an Apollo astronaut. Did you reach out to Aldrin, Bean, or the families of Armstrong, Conrad and Shepard to let them know about the tribute? If so, what was their reaction? [NASA's 17 Apollo Moon Missions in Pictures]

AW: I didn't ask permission, no. I just thought that it was a cool homage to the astronauts.

However, I have met with Buzz Aldrin many times — both before and after writing Artemis — and he certainly had no complaints about the best part of town being named after him.

cS: Artemis is not an American-led moon base (in fact, many of the characters are not from the U.S.). Obviously, you wrote it into the story, but do think the Apollo moonwalkers' names resonate with an international audience as much as they do with an American one?

AW: Artemis is similar to the U.S. in the early 1800s. If you can get there, you can live there. Because of that, it's an extremely international city, though that doesn't mean everyone gets along. They break off into groups based on culture just like any other set of diaspora.

I think most people in the world know that Neil Armstrong was the first human to walk on the moon, and many know Buzz Aldrin was second — in the same way that most Americans know that Yuri Gagarin was the first human in space. Major landmarks like that are generally known internationally as well as they're known domestically.

As for the rest of the bubble names, most people don't remember [the later flights' moonwalkers'] names. So names like "Conrad," "Bean" and "Shepard" aren't going to resonate with Americans either. So there's no significant difference between Americans and non-Americans when it comes to those name recognitions.

cS: Beyond the Apollo 11 Visitor Center and the moonwalker-named domes, are there other references to Apollo or space history in "Artemis"?

AW: When someone goes to Artemis, they take a lunar cycler, a space hotel that's in a ballistic (no fuel required) orbit which regularly comes close to Earth and then the moon at predictable intervals. There are several of the cyclers in action. They are functionally the same as cruise-liners.

All the cyclers are named after Apollo CSM pilots. Those are the people who flew the command module and stayed in lunar orbit while their crewmates were on the moon.

cS: You also referenced real space history in "The Martian," with the inclusion of NASA's Pathfinder lander and the Sojourner rover. Do you find real-life references like Tranquility Base help readers relate to the story you want to tell?

AW: Somewhat. Mainly the existence of the [Apollo 11 landing] site itself, and the location of items there.

cS: What about your own frame of reference? You were born just a few months before Apollo 17 in 1972. When did you first become aware astronauts had walked on the moon? Are you an Apollo history enthusiast?

AW: "I don't remember when I first learned about the Apollo missions. I would have been very young. My father is a space enthusiast (that's where I get it) and I am sure he was talking about that with me as soon as I could talk. I am definitely an Apollo enthusiast. I honestly think it was the greatest accomplishment in the history of mankind.”

See maps of the location of Artemis, the Apollo 11 Visitor Center and other landmarks on the moon from Andy Weir’s "Artemis" at collectSPACE.