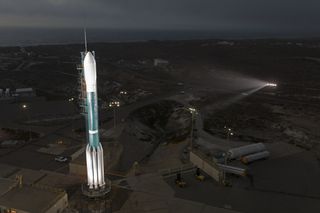 A United Launch Alliance Delta II rocket stands atop Space Launch Complex 2 on Nov. 13, 2017 as the pad gantry is rolled back in preparation for the launch of the Joint Polar Satellite System 1 weather satellite. An attempted launch on Nov. 14 was delayed by a rocket issue.
(Image: © NASA/Glenn Benson)

A first-of-its-kind weather satellite will have to wait at least 24 hours to begin its mission for NOAA and NASA after a rocket issue prevented an attempted liftoff from Vandenberg Air Force Base in California today (Nov. 14).

The Joint Polar Satellite System-1 satellite, or JPSS-1, was set to launch into a polar orbit around Earth at 4:47 a.m. EST (0947 GMT) to begin measuring atmospheric temperature, moisture, ozone levels, vegetation and rainfall across the globe with five advanced instruments. But a bad reading on the first stage of satellite's United Launch Alliance Delta II rocket, as well as boats in the safety zone, forced NASA to call off the launch just minutes before liftoff. The next launch attempt will be on Wednesday (Nov. 15) at 4:47 a.m. EST.

"Just at the time we were expected to come out of hold at T-4 minutes, there were a couple of positions that reported that they were no-go, and with the very short launch window that we have this morning, there was not enough time to completely work the issues and clear them," NASA spokesperson Mike Curie said at about 4:43 a.m. EDT (0943 GMT) during live commentary. "The rocket is in a safe condition, the spacecraft, JPSS-1, is in a safe condition." [Satellite Quiz: Do You Know What's Up There?]

The Delta II rocket's window to launch JPSS-1 into the correct orbit was just over a minute long.

NASA launch manager Omar Baez confirmed that up until 4 minutes before liftoff, the only issue launch controllers were tracking were a few boats in the boat exclusion area off the coast near Vandenberg Air Force Base, but then one parameter on the first stage also went out of limits.

"There was some discussion, short, brief discussions, but with our short window there wasn't enough time to outbrief that issue and come to resolution," he said. "We're setting up for a 24-hour recycle; tomorrow's window will start one second later, at 9:43:03, versus :02, which was today's start, and the same window. That's where we stand today."

In addtion to the JPSS-1 satellite, the Delta II rocket is also slated to heft five small cubesats into orbit, including one that would use a microwave imager to monitor Earth's weather like its much larger satellite cousin.

NASA will webcast the JPSS-1 satellite launch on Wednesday, beginning at 4:15 a.m. EST (0915 GMT). You can watch the launch live here, courtesy of NASA TV.