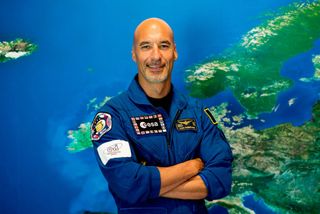 Italian astronaut Luca Parmitano was recently given a celestial honor: An asteroid was named after him.
(Image: © ESA–Manuel Pedoussaut, 2016)

A European astronaut now has a permanent presence in space. Luca Parmitano — who flew on the International Space Station in 2013 — has an asteroid named after him, called "37627 Lucaparmitano."

The asteroid, formerly known just as 1993 TD, was discovered in 1993 by Italian astronomer Vincenzo Silvano Casulli, at the Osservatorio di Vallemare di Borbona in Italy's Lazio region, northeast of Rome, according to a statement from the European Space Agency.

In the statement, Casulli said renaming the asteroid was appropriate because "Luca, who flew six months on the Space Station, didn't have his own asteroid." The name has been approved by the International Astronomical Union, the official body that oversees astronomical monikers. [In Photos: Luca Parmitano Become Italy's 1st Spacewalker]

The asteroid, one of 251 objects that Casulli discovered, is about 5 kilometers (3.1 miles) in diameter and orbits the sun in a little less than four Earth years. In early 2018, the asteroid will be more easily visible from Earth as the space rock moves away from the sun, according to the statement. While it is not visible to the naked eye, observatories in the United States, Europe and China have confirmed the asteroid's orbit.

Parmitano spent 166 days in space during Expeditions 36/37 in 2013, completing two spacewalks (making him Italy's first spacewalker). He was praised for his calm demeanor when his spacesuit helmet unexpectedly filled up with water during the second spacewalk, prompting NASA to suspend all extra-vehicular activity for a few months during an investigation of the issue. Parmitano is scheduled for a second trip to the International Space Station in 2019.

"I'm still grappling with the idea that my name is connected to a celestial body," Parmitano said in the statement. "It's a wonderful gift, for which I feel honored and humbled at the same time. I'm grateful to Mr. Casulli for thinking of me.

"I can't help but wonder about this asteroid, perennially traveling so far away from our world," Parmitano continued. "What would it be like to stand on it? What would I see? How many sunrises and sunsets would this tiny world give me in a day? I know I will never travel there, but in a way, I'm already there.

"Maybe, although invisible to the eye, 'my' asteroid will inspire people everywhere to look up, think about our presence here on our beautiful planet and work to make it a better place."