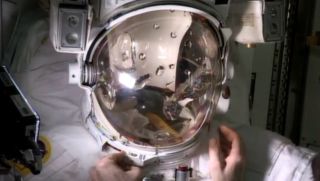 A potentially deadly spacesuit water leak that nearly drowned an Italian astronaut during a spacewalk last July was one of the scariest close calls in NASA's spacewalk history. In fact, the spacesuit also leaked during an earlier spacewalk, but went undetected at the time, according to a NASA report released today (Feb. 26).

The announcement came as NASA released the results of an investigation into the harrowing spacewalk on July 16, 2013, in which water flooded the spacesuit helmet of Italian astronaut Luca Parmitano, forcing NASA to abort the spacewalk to get him to safety. In the end, the malfunction was completely unexpected and unlike anything the space agency planned for.

NASA officials didn't realize that the leak had also occurred at the end of a spacewalk one week earlier on July 9. Parmitano and his fellow spacewalker, NASA's Chris Cassidy, thought the water in the suit after the July 9 EVA (NASA lingo for extra-vehicular activity or spacewalk) was the product of a leaky drink bag. That conclusion was incorrect, with the subsequent investigation finding that the suit also leaked during the earlier excursion. [See more photos from the harrowing spacewalk]

If the water buildup after the first spacewalk had been discussed in more detail, Mission Controllers probably would have realized that the "issue needed to be investigated further before pressing ahead" to the next spacewalk on July 16, officials stated in the 222-page investigation report released today.

"I would say of all the EVA issues we've encountered to date, this is probably the most serious one that we've encountered," Chris Hansen, chairman of the Mishap Investigation Board told members of the media in a news conference today. "I don't know of any other failures that have had this potential hazard associated with them."

After the spacesuit incident — which NASA calls a "high visibility close call" — space agency officials halted all non-emergency spacewalks until they could learn more about what caused the malfunction. Engineers found that the source of the water leak was a clogged filter, however, they are not sure what contaminated the filter in the first place. Engineers are still trying to find the root cause of the buildup.

Parmitano's cool head helped keep him safe as he made his way back to the airlock, NASA officials said.

"EV2's [Luca's] calm demeanor in the face of his helmet filling with water possibly saved his life," members of the Mishap Investigation Board wrote in their report.

Parmitano's helmet began filling with water just after venturing outside of the space station on July 16. Eventually, the water filled his eyes, ears, nose and part of his mouth, making it difficult to breathe.

"About half an hour into the EVA [spacewalk], 45 minutes maybe, Chris and I were ahead on our tasks so we were starting our third task and I felt some water on the back of my head," Parmitano said in a video after the incident. "I realized that it was cold water, it was not a normal feeling, so I told ground [control]."

While the spacewalk was expected to last about 6.5 hours, Mission Controllers aborted the space excursion about one hour into it. Once back inside the airlock, Parmitano and the other space station crewmembers found that about 1.5 liters of water filled the helmet.

In December 2013, NASA astronauts Rick Mastracchio and Mike Hopkins used the spacesuit during an urgent spacewalk to fix the space station's vital cooling system after it malfunctioned. Although ground controllers were confident that the suit would not leak again (astronauts replaced some of the suit's components before the spacewalk), they also had the spaceflyers install a snorkel in each helmet just in case. Mastracchio and Hopkins conducted the spacewalks without incident.

NASA officials are not planning on resuming non-urgent spacewalks until after a few different goals have been met. The space agency plans to address all 16 of the highest priority (level 1) suggestions from the Mishap Investigation Board and figure out the root cause of the engineering failure before returning to regular spacewalk activities.

"I think it's a tribute to the agency that we're not hiding this stuff, that we're actually out trying to describe these things, and to describe where we can get better," William Gerstenmaier, associate administrator for NASA's Human Exploration and Operations Mission Directorate said today. "I think that's how we prevent Columbias and Challengers. We do it by these little, subtle things that don't see quite as big. We take them to their worst case conclusions and then we learn from that."

You can read the full report via NASA: http://www.nasa.gov/sites/default/files/files/Suit_Water_Intrusion_Mishap_Investigation_Report.pdf