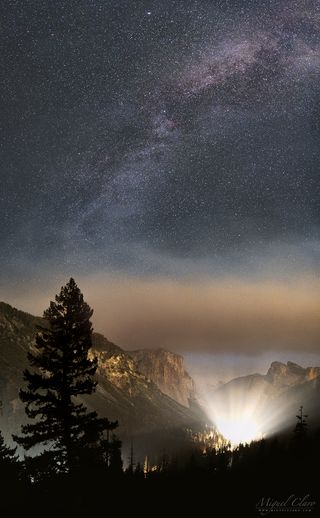 The Milky Way shines above a band of smoke that is visible from the Tunnel View of Yosemite National Park.
(Image: © Miguel Claro)

Miguel Claro is a Lisbon, Portugal-based professional photographer, author and science communicator who creates spectacular images of the night sky. As a European Southern Observatory photo ambassador, a member of The World At Night and the official astrophotographer of the Dark Sky Alqueva Reserve, he specializes in astronomical "Skyscapes" that connect Earth and the night sky. Join him here as he takes us through his photograph "Milky Way from the Tunnel View of Yosemite National Park."

The Milky Way galaxy shines over a blanket of smoke in this gorgeous night-sky photo of Yosemite National Park in northern California.

Within this vast stretch of wilderness, animals live in harmony with the strength of granite, the power of glaciers and the tranquility of the high sierra, demonstrating the persistence of life despite the massive fires that blaze through the area each summer.

When I captured this photo of the Milky Way over Yosemite National Park on Aug. 28, fires filled the skies with smoke for days. Stars of the Milky Way twinkle above a band of smoke and dust in this framing of the beautiful Tunnel View, a famous scenic overlook in the park. Construction on the exit road of the park helped to light up the scene for several hours. [Gallery: Stunning Photos of Our Milky Way Galaxy]