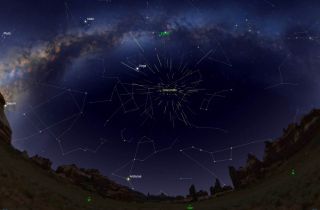 The annual Draconid meteor shower peaks Oct. 8, and the shower is in outburst, but don't get your hopes up for a spectacular sky show.

Even at their peak — which, this year, occurs overnight on Tuesday, Oct. 8, and early morning Wednesday (Oct. 9) —  the Draconids are usually modest, generating just a few meteors per hour. This year they are in outburst, and could reach rates as high as 40-50 per hour, but a full moon will wash out all but the brightest.

The shower occasionally puts on an incredible display. In 1933, for example, skywatchers in Europe saw up to 500 Draconids per minute, according to Space.com skywatching columnist Joe Rao. And observers throughout the Western United States saw thousands of Draconids per hour at the shower's peak in 1946, he added. [How to See the Best Meteor Showers of 2018]

The Draconids occur when Earth plows through the stream of debris shed over the eons by Comet 21P/Giacobini-Zinner. Dramatic outbursts like those of 1933 and 1946 — and lesser ones in 1926, 1952, 1985, 1998 and 2011 — seem "to occur only when the Earth passes just inside Comet Giacobini-Zinner's orbit shortly after the comet itself has gone by," Rao wrote.

Experts aren't predicting that such a close pass will happen this year, although there will be a less intense outburst. So, again: Don't expect a dazzling Draconid storm.

The Draconids "are an all or nothing shower," Cooke told Space.com. "They are rich in faint meteors if they appear. We are predicting a Draconid outburst this year; the problem is the moon will be full, which will wash out the Draconids."

Most meteor showers are best viewed in the early morning hours. But to maximize your Draconid experience, start observing in the evening this weekend, as soon as it gets dark. That's because the constellation Draco — the shower's "radiant," or point from which the meteors appear to radiate — is highest in the sky shortly after nightfall.

Editor's note: If you snap an amazing photo of a Draconid meteor or any other night-sky sight and you'd like to share it with Space.com for a story or image gallery, send images, comments and location information spacephotos@space.com.