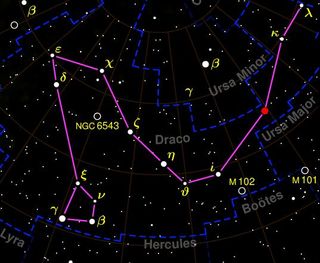 Despite its size and designation as the eighth-largest constellation, Draco, the "dragon" constellation, is not especially prominent. The name is derived from the Latin term draconem, meaning "huge serpent," and the constellation literally snakes its way through the northern sky.

Draco is circumpolar, meaning that it never sets below the horizon and is always visible in the Northern Hemisphere, but cannot be seen in the Southern Hemisphere.

Draco's stars are not very bright. The head of the dragon consists of four stars (Beta, Gamma, Nu and Xi Draconis) in a trapezoid and located just north of Hercules. From there, the dragon's body winds its way through the sky, ending between the Big Dipper and Little Dipper. From early to mid-October, a meteor shower known as the Draconids appears to radiate from Draco's head.

Other stars in the constellation include Thuban (Alpha Draconis), which forms the tail. Because Earth wobbles on its axis (called precession), Thuban was the pole star around 2600 B.C. when the ancient Egyptians were building the pyramids.

The Cat's Eye Nebula is also contained within the constellation. [Gallery: Strange Nebula Shapes, What Do You See?]

The constellation encompasses several faint galaxies, including the Draco Dwarf Galaxy, one of the least luminous galaxies with a diameter of about 3,500 light years.

A handful of exoplanets have been found in Draco so far, such as:

The name Draco has been linked to several dragons in Greek mythology. One version is that Cadmus slayed the dragon Draco in his quest to find his sister, Europa, who had been taken to Crete by Zeus. In another account, the Athenian goddess Minerva took Draco by the tail and put it into the sky during the battle for Mount Olympus. Draco has also been identified in early Christianity as the serpent that tempted Eve in the Garden of Eden.