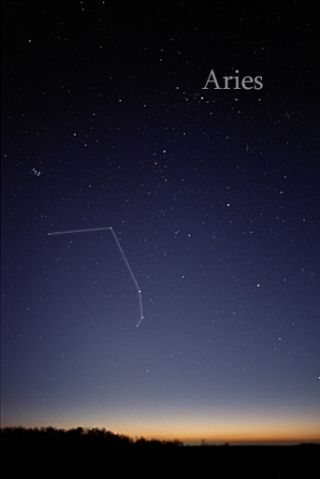 Aries is a mid-size constellation in the Northern Hemisphere.
(Image: © Till Credner, allthesky.com)

Aries is a midsize constellation that's not particularly luminous, with only a few stars that are easily visible to the naked eye.

Aries lies along the zodiac, which is the band of constellations in the sky through which the sun, moon and stars appear to travel from the perspective of Earth. At the vernal equinox (or the beginning of spring, when the sun crosses the celestial equator to the Northern Hemisphere) the sun's observed position used to be in the same spot as Aries. But since Earth's rotational orientation gradually changes over time, the vernal equinox has shifted, and the constellation now falls within Pisces, according to Encyclopedia Britannica. As Earth continues wobbling through its 26,000-year precessional cycle, 13 zodiac constellations will take turns hosting the vernal equinox.

While the constellation Aries has different connotations in different ancient cultures, the Greeks and the Egyptians traditionally associated the constellation with a ram. In Greek mythology, the ram was golden and was sacrificed to Zeus, the Greek leader of the gods. Jason of the Argonauts later recovered the ram's golden fleece, according to Encyclopedia Britannica.

Although Aries is an ancient constellation, it was not officially recognized by the International Astronomical Union until 1922, and its boundaries were not defined until 1930 by astronomer Eugène Delporte.

Aries is located in the Northern Hemisphere between Pisces to its west and Taurus to its east. The best view of Aries occurs on December nights around 9 p.m. local time.

Alpha, Beta and Gamma Arietis are the three brightest stars within the Aries constellation. The brightest is the red giant star Alpha Arietis, also known as Hamal. Hamal has a magnitude of 2.0, which is about the same apparent brightness in the sky as Mars when the planet is at its farthest point from Earth.

The Aries constellation also has few significant nebulae or galaxies. The most significant among them is probably NGC 772, a galaxy about 100 million light-years from the Milky Way (our home galaxy) that sports a protruding spiral arm. Aries also contains a planetary system called 30 Ari, which consists of a gas giant with four stars in its sky. The planetary system is about 136 light-years from the sun.

This article was updated on March 4, 2019 by Space.com contributor Elizabeth Howell.