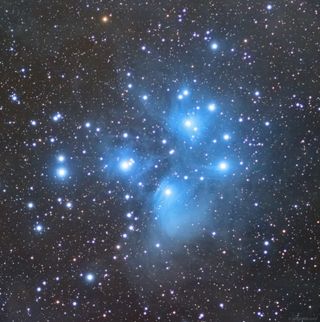 Astrophotographer Jeff Johnson sent in a photo of the Pleiades (AKA The Seven Sisters or M45), an open star cluster in Taurus. Johnson is based in the southwestern United States and sent in the photo on Nov. 28, 2014.
(Image: © Jeff Johnson (http://jeffjastro.com))

The Pleiades are a group of more than 800 stars located about 410 light-years from Earth in the constellation Taurus. Most skywatchers are familiar with the assembly, which looks something like a smaller, hazier version of the Big Dipper in the night sky.

Also known as the "Seven Sisters" and Messier 45, the object derives its English name from Greek legend. The Pleiades are the seven daughters of the Titan god Atlas and the ocean nymph Pleione. During an ancient war, Atlas rebelled against Zeus, the king of the gods, who sentenced his foe to forever hold up the heavens on his shoulders. The sisters were so sad that Zeus allowed them a place in the sky in order to be close to their father.

The Pleiades are an example of an open star cluster — a group of stars that were all born around the same time from a gigantic cloud of gas and dust. The brightest stars in the formation glow a hot blue and formed within the last 100 million years. They are extremely luminous and will burn out quickly, with life spans of only a few hundred million years, much shorter than the billions of years our sun will enjoy.

Related: The Brightest Stars in the Sky: A Starry Countdown

Many different cultures have names for the Pleiades that often include the number seven, such as the "Seven Sisters," "Seven Maidens" or "Seven Little Girls." This might seem odd to modern observers, who can typically discern only six stars in the cluster. But that's simply a consequence of a light-filled night sky. With sharp eyes and a clear, dark sky, it's possible to spot up to 12 stars in the Pleiades group.

How to find Pleiades

To find Pleiades, you can start by locating the famous constellation Orion, the hunter. Draw a line using the three stars in Orion's belt and then follow it upward, past his bow.

The first bright star you'll see is Aldebaran, the eye of the bull Taurus, according to EarthSky. In Arabic, Aldebaran means "follower" since it follows the Pleiades across the sky. The cluster itself will be located just a bit past the bright star, visible as a small dipper-shaped arrangement of stars.

Given its beauty, the cluster is a frequent subject for amateur astrophotographers.

When NASA's exoplanet-hunting Kepler telescope needed calibrating so it could clearly identify bright stars, astronomers turned the telescope at the Pleiades.

By pointing Kepler at the Pleiades, researchers confirmed that six of the Seven Sisters — Alcyone, Atlas, Electra, Merope, Taygete and Pleione — are slowly pulsating type B stars, which change in brightness over the course of one day. The seventh star, named Maia, has a brightness that fluctuates over a longer period of 10 days.

This was already known, but the researchers wanted Kepler, which normally looks at extremely dim stars and watches for dips in brightness that might indicate an orbiting planet, to study brighter stars as well. Before this, when the telescope's camera would try to look at bright stars, the images would become overly saturated and contain digital artifacts and other distortions.

By using the Pleiades as a guinea pig, the astronomers gave Kepler a new ability, expanding its search for exoplanets to include brighter stars as well as dim ones.