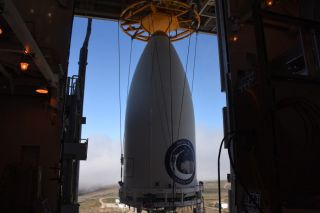 A U.S. spy satellite will launch on a clandestine mission early Sunday (Sept. 24), and you can follow the spaceflight action live online.

You can also watch the liftoff directly via ULA's website here.

The launch was originally scheduled to take place early Friday (Sept. 22), but ULA pushed it back to replace a faulty battery on the Atlas V.

NROL-42 will be operated by the U.S. National Reconnaissance Office (NRO), which builds and manages the nation's fleet of spy satellites. NRO missions tend to be classified, and NROL-42 is no exception; U.S. officials have not revealed what the spacecraft will be doing or what its orbit will be. [The Most Dangerous Space Weapons Ever]

NROL-42 will be the 25th satellite that ULA, a joint venture of aerospace giants Boeing and Lockheed Martin, has launched for the NRO. The 24 previous flights — which were performed by Atlas V, Delta IV and Delta II rockets — have all been successful.

The upcoming liftoff will be the 73rd for the two-stage Atlas V, which debuted in 2002 and has lofted such high-profile payloads as NASA's Mars rover Curiosity and New Horizons spacecraft. All Atlas V launches to date have been successful.