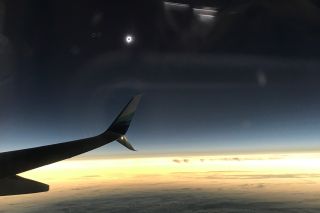 For the second time in 18 months, Alaska Airlines maneuvered a B737-900 aircraft into the path of a total solar eclipse, thrilling some 100 enthusiastic eclipse watchers and reporters who were along for the ride.

Yesterday's (Aug. 21) flight plan was developed by astronomer and well-known eclipse chaser Glenn Schneider, of the University of Arizona's Steward Observatory. Schneider, however, was not on board this particular flight, deciding instead to observe the "Great American Solar Eclipse" from the ground in Madras, Oregon.

It was the 12th time I had experienced totality and the fifth time I did so from an airborne vantage point. (I was also on the previous Alaska Airlines eclipse flight, which viewed the total solar eclipse of March 8, 2016.) The plane, piloted by Capt. Hal Andersen, gave us a magnificent view of totality from a point roughly 1,000 miles (1,600 kilometers) west of the Oregon coast. [Photos: Great American Solar Eclipse Seen from a Plane]

Schneider and I chose that location in order to make the totally eclipsed sun readily accessible to those with window seats on the starboard (right) side of the aircraft, as well as for passengers sitting in the adjacent (middle) seats.

We saw totality from an altitude of 40,000 feet (12,200 meters), which placed us above more than 75 percent of the Earth's atmosphere. So we saw the sun's outer atmosphere — the corona — shine with a dazzling brilliance that can rarely be witnessed from the ground.

The best way to describe the corona from our high-altitude vantage point was "electric white." It was a classic "sunspot minimum"-type corona; when there are very few spots on the sun, the corona tends to display long "streamers." Indeed, we saw a corona displaying a long, spike-like streamer extending down from the 7 o'clock position, with two more streamers extending almost straight up. The corona started becoming visible a good 10 seconds before the final sliver of sunlight was extinguished. Totality lasted 103 seconds.

Near the end of totality, a beautiful ruby-red prominence — a tongue of hydrogen gas rising from the sun's surface — appeared near the 3 o'clock position on the sun's darkened disk. This was followed by a beautiful arc of red light along the sun's rim — the solar chromosphere — which heralded the first spot of returning sunlight appearing from behind the craggy lunar landscape. The return of this light produced a beautiful "diamond ring" in the sky.

Among the experts on board was Michael R. Barratt, a NASA astronaut who served as a mission specialist on the 39th and final mission of the space shuttle Discovery; Tanya Harrison, an astronomer at Arizona State University; Stan Gedzelman, professor emeritus of Earth and atmospheric science at the City College of New York and executive editor of Weatherwise magazine; Evgenya Shkolnik, a professor of astrophysics at Arizona State University; and Dennis Cassia, a veteran of four total eclipses, including the 1973 total solar eclipse, which lasted more than 7 minutes for viewers in the Sahara Desert.

Joe Rao serves as an instructor and guest lecturer at New York's Hayden Planetarium. He writes about astronomy for Natural History magazine, the Farmer's Almanac and other publications, and he is an on-camera meteorologist for Verizon Fios1 News in Rye Brook, New York. Follow us @Spacedotcom, Facebook or Google+. Originally published on Space.com.