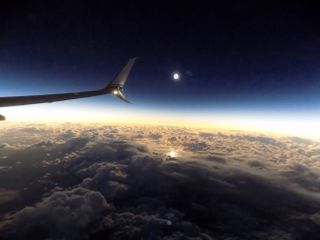 The total solar eclipse of March 8, 2016, as seen by Space.com skywatching columnist and other passengers aboard Alaska Airlines Flight 870 from Alaska to Hawaii.
(Image: © Joe Rao/Space.com)

Tuesday's total eclipse of the sun thrilled millions of skywatchers in the Pacific Ocean region — including 163 passengers aboard a flight from Alaska to Hawaii, who witnessed the spectacle from an altitude of 37,000 feet (11,000 meters).

I was one of those lucky airborne observers. Nearly a year ago, I approached Alaska Airlines with a proposal: alter the company's regular Anchorage-to-Honolulu flight plan on March 8, 2016, and delay takeoff by about 30 minutes, in order to place the aircraft — a 737-900 — in proper position to rendezvous with the moon's shadow as the solar eclipse tracked eastward over the North Pacific Ocean.

Thanks to a flight plan drawn up by fellow eclipse chaser Glenn Schneider, of the University of Arizona, and the pilot-in-charge on Alaska Airlines Flight 870, Capt. Hal Anderson, we were treated to an absolutely beautiful 113 seconds of total solar eclipse. One member of our flight, Mike Kentrianakis of American Astronomical Society, captured the spectactular video of the eclipse included in this report. [See photos of the 2016 total solar eclipse]

The most memorable feature of Tuesday's solar eclipse was the approaching elliptical lunar shadow, which moved at nearly 8,000 mph (12,875 km/h) and loomed like a "tornado of darkness," as one passenger put it.

We were also treated to a gorgeous "diamond ring" effect and saw the sun's beautiful outer atmosphere, or corona, surrounding the blocked-out solar disc. Two ruby-red prominences were evident as well, jutting up from the sun's rim at roughly 12 and 2 o'clock (as viewed with 7 x 35 binoculars). We saw another beautiful diamond ring, and then, the total solar eclipse came to an end.

The passengers of Flight 870 were amazed and delighted by the celestial show. I was sitting with a father and three young children. The man, whose name was Owen, told me that his father used to tell him of seeing a total eclipse in Oregon in the late 1970s (probably the eclipse of Feb. 26, 1979), and that he always wanted to see one. Near mid-totality, as his kids gazed transfixed out the window, Owen slapped me on the back and said, "Wow!"

Dan McGlaun of Indianapolis handed out eclipse glasses to all of the passengers. I had prepared a four-page flier for everyone that provided details about what the passengers should look for during the eclipse. After totality, Craig Small, a veteran of 31 solar eclipses — all seen under clear skies, amazingly — broke out his personal lucky charm: a large blue, white and red nylon eclipse flag, which was paraded up and down the aisle of the plane.

Tuesday's event was the 11th total solar eclipse that I've witnessed, and it extended my time "basking in the shadow of the moon" to 27 minutes and 5 seconds. This one was special, and it's most gratifying to know that I was able to make this all happen.

Editor's note: If you safely captured an amazing photo of Tuesday's total solar eclipse and would like to share it with us and our news partners for a story or gallery, send images and comments to Managing Editor Tariq Malik at spacephotos@space.com. This story was updated on April 15 to cite Mike Kentrianakis of the American Astronomical Society as the source of the video at top.