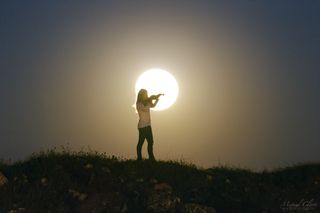 The full Pink Moon rises behind a violinist on April 11, 2017 in this amazing photo by veteran astrophotography Miguel Claro. The image was taken in Borba, Alentejo in Portugal.
(Image: © Miguel Claro)

Miguel  Claro is a professional photographer, author and science communicator based in Lisbon, Portugal, who creates spectacular images of the night sky. As a European Southern Observatory Photo Ambassador and member of The World At Night and the official astrophotographer of the Dark Sky Alqueva Reserve, he specializes in astronomical "Skyscapes" that connect both Earth and night sky. Join Miguel here as he takes us through his photograph "Playing in the Moonlight":

Over the centuries, the moon has inspired not only astronomers and scientists, but also poets, painters, writers and musicians, such as Beethoven, who wrote the "Moonlight Sonata" in 1801.

This single shot shows a beautiful moonlight scene like those that inspire musicians like Beethoven. It was captured in Borba, Portugal, and shows the April full moon rising in the background against the silhouette of a young woman who is holding with love her violin in a small hill of a marble quarry. [Moon Photography Tips from Astrophotographers: A Visual Guide]

April's full moon is the first full moon of spring in the Northern Hemisphere and the first fall season full moon in the Southern Hemisphere. Also known as the Pink Moon, it does not actually turn pink — not even when it's rising above the horizon, when the moon normally appears more yellowish-orange than white due to the layers of the atmosphere.

Similar to other moon names, the Pink Moon name originated in Native American traditions of keeping time based on lunar phases. The Pink Moon owes its name to pink flowers called wild ground phlox, which bloom in springtime and become widespread throughout the U.S. and Canada at that time of year.