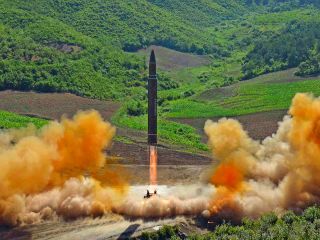 This photo distributed by the North Korean government shows the launch of an intercontinental ballistic missile (ICBM) in North Korea's northwest, Tuesday, July 4, 2017. Independent journalists were not given access to cover the event depicted in this photo.
(Image: © Korean Central News Agency/Korea News Service/AP)

"The United States strongly condemns North Korea's launch of an intercontinental ballistic missile," U.S. Secretary of State Rex Tillerson said in a statement yesterday (July 4). "Testing an ICBM represents a new escalation of the threat to the United States, our allies and partners, the region, and the world."

North Korean state-run media asserted that the newly tested ICBM will allow the nation — which has repeatedly threatened to destroy the United States, South Korea and Japan — to deliver nuclear weapons to targets anywhere in the world. But that claim is likely overblown, according to Western experts.

The available evidence suggests that the missile splashed down in the ocean about 590 miles (950 kilometers) from the launch site after flying for 37 minutes, said missile expert David Wright, a senior scientist at the Union of Concerned Scientists, a science advocacy group in Cambridge, Massachusetts.

"A flight time of 37 minutes would require it to reach a maximum altitude of more than 2,800 km (1700 miles)," Wright wrote in a blog post yesterday. "So if the reports are correct, that same missile could reach a maximum range of roughly 6,700 km (4,160 miles) on a standard trajectory. That range would not be enough to reach the lower 48 states or the large islands of Hawaii, but would allow it to reach all of Alaska."

Missiles that can fly at least 3,400 miles (5,500 km) are regarded as ICBMs. Western analysts believe North Korea has been working to develop such a vehicle for quite some time, though the exact route the nation is taking has remained a mystery. (North Korea is famously secretive, so it's hard to know much about its missile and rocket program with certainty.)

Yesterday's test was therefore revelatory. It apparently involved a KN-17 missile, which Pyongyang has test-launched before, topped with a second stage to make "a brand-new missile that has not been seen before," CNN reported, citing U.S. officials.

"The focus now is on the capability of that second stage, and how it technically contributed to making Pyongyang's latest test its first ever intercontinental ballistic missile (ICBM) launch," CNN wrote.