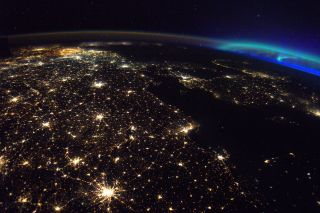 Astronaut Thomas Pesquet, with the European Space Agency, photographed the aurora over Northern Europe from on board the International Space Station.
(Image: © ESA/NASA)

The enchanting blue and green lights of an aurora dance above the city lights of Northern Europe in a stunning new image taken by an astronaut in space.

In between mission tasks and scientific experiments aboard the International Space Station (ISS), French astronaut Thomas Pesquet has captured some amazing images from the orbiting outpost. In a recently shared snapshot by Pesquet, the aurora borealis can be seen in the top right corner of the frame, with the sparkling lights of Northern Europe's cities in the foreground.

According to NASA scientists, the solar particles can cause electrical current changes in the magnetic field, sending energetic particles into the upper atmosphere. When these particles interact with the gases in the upper atmosphere, those gases become charged. When this gained energy is released, the aurora glows. That is, as the gases give up the energy, they release photons (light particles) of specific wavelengths, creating the rich blue and greenish hues.

This wasn't Pesquet's first sighting of the northern lights from the ISS. The astronaut first caught an auroral display on Jan. 18, 2017, and snapped a photo of the light show, reported Space.com.

"It is literally a visual representation of the Earth's magnetic field protecting all living beings from space radiation," Pesquet wrote of the aurora on Flickr.

Along with taking his stunning photography, Pesquet has performed about 50 scientific experiments aboard the ISS, according to the European Space Agency. Pesquet's mission "Proxima" — named for the sun's closest star and continuing a tradition of naming French astronauts' missions after stars or constellations — ended this week. Pesquet and Russian cosmonaut Oleg Novitskiy returned to Earth today (June 2).

A three-person crew made up of cosmonaut Fyodor Yurchikhin and NASA astronauts Peggy Whitson and Jack Fischer will operate the station until the arrival of three new crewmembers later this summer, according to NASA.