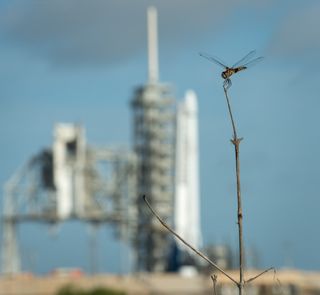 A little dragonfly paid a visit to the much larger Dragon spacecraft at Cape Canaveral Thursday (June 1), just hours before SpaceX's Falcon 9 rocket launch was scrubbed due to inclement weather.

For the first time, SpaceX is launching a used Dragon spacecraft, sending the same capsule into space for its second delivery to the International Space Station (ISS). The mission, titled CRS-11, is now slated to launch on Saturday (June 3) at 5:07 p.m. EDT (2107 GMT). You can watch live coverage of the launch here.

Having stumbled upon an incredibly poetic photo opportunity Thursday morning, NASA photographer Bill Ingalls snapped this shot of a male Marl Pennant dragonfly posing in front of Pad 39A at Kennedy Space Center in Florida.

The dragonfly is probably completely oblivious to the impending launch, which will soon rattle its world as sonic shock waves propagate for miles. And it definitely has no idea that it shares a name with the spacecraft that is perched on top of the 230-foot (70 meters) rocket. But with that picture-perfect pose atop a vertical twig, it certainly looks like the insect is being a little copycat.