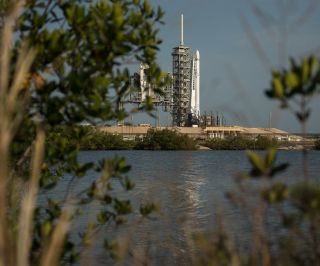 The SpaceX Falcon 9 rocket, with the Dragon spacecraft onboard, is seen shortly after being raised vertical at Launch Complex 39A at NASA's Kennedy Space Center in Cape Canaveral, Florida, Thursday, June 1, 2017.
(Image: © Bill Ingalls/NASA)

SpaceX aims to launch a reused Dragon spacecraft for the first time Saturday (June 3), and you can watch the momentous mission live.

Seated atop a SpaceX Falcon 9 rocket, the Dragon is slated to lift off from the historic Pad 39-A at NASA's Kennedy Space Center in Florida at 5:07p.m. EDT (2107 GMT), beginning its three-day journey to deliver cargo to the International Space Station. The launch was originally scheduled to occur Thursday (June 1), but lightning scrubbed that attempt.

Watch the Dragon blast off — followed by another upright rocket booster landing — live here at Space.com, courtesy of SpaceX. The live webcast begins at 4:30 p.m. EDT (2030 GMT). You can also watch live coverage on NASA TV or via the SpaceX website.

The last time this particular vessel flew to space was with the CRS-4 cargo mission in 2014. That mission was one of the 12 that SpaceX has agreed to fly for NASA, to deliver supplies and science experiments to the International Space Station. Thursday's flight, titled CRS-11, will be the 11th, carrying about 6,000 lbs. (2,700 kilograms) of cargo. [6 Fun Facts About SpaceX]

After they undock from the space station, Dragon spacecraft have always returned to Earth by splashing down in the ocean. But never before has one of these capsules been retrieved, refurbished and reflown.

In another historic first, SpaceX launched and landed a used Falcon 9 rocket in March. With Thursday's flight, the private spaceflight company aims to move one giant leap closer to full reusability of its launch vehicles — a lofty goal, but one that would help the spaceflight industry to spare the cost of continuing to build non-reusable rockets in the future.

The second stage of the Falcon 9 rocket ignites after the first stage separates and returns to Earth, while the payload fairing protects the Dragon capsule from burning up in the atmosphere. [Reusable Rocket Launch Systems: How They Work (Infographic)]

"I'm not sure how long it will take until we refly [payload] fairings, but I would expect us to take some time, similar to the first stage," Koenigsmann added.

After the CRS-11 first stage separates, it will return to Cape Canaveral Air Force Station in Florida for what will be SpaceX's fifth rocket landing on land. SpaceX has also landed six Falcon 9 rocket boosters on drone ships, having recovered a total of 10 boosters so far.