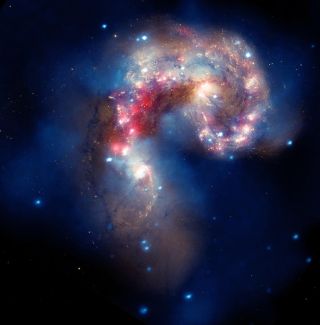 This beautiful new composite image of two colliding galaxies was released by NASA's Great Observatories. The collision between the Antennae galaxies, which are located about 62 million light-years from Earth, began more than 100 million years ago and is still occurring.
(Image: © NASA, ESA, SAO, CXC, JPL-Caltech, and STScI [Full Story])

Paul Sutter is an astrophysicist at The Ohio State University and the chief scientist at COSI Science Center. Sutter is also host of Ask a Spaceman, RealSpace, and COSI Science Now. Sutter contributed this article to Space.com's Expert Voices: Op-Ed & Insights.

Two galaxies are drawn together by forces they can't see but they can feel. It's a mutual gravitational attraction. It's inevitable: Inch by inch, light-year by light-year, as the cosmic clock ticks on through the eons, the galaxies grow closer.

They can't help it; their motion was set by tiny instabilities billions of years ago that have only grown stronger in the eons since. As they near each other, the galaxies begin to embrace as thin tendrils of gas and stars reaching out through the tenuous medium between them.

Then, they collide. These two massive structures, each 100,000 light-years across, host hundreds of billions of stars. During the merger, 100 trillion suns' worth of material collide, mix and ignite. [When Galaxies Collide: Photos of Great Galactic Crashes]

And what's left after the fireworks? A broken, dim, dying galaxy — one that will never shine as brightly or as fully as it could in the era before the great disaster.

It's a tragic dance, a story told over hundreds of millions of years. And it's one that we only recently began to understand.

As soon as astronomers realized that there are objects that are separate from our own Milky Way, they observed some galaxies that appeared to be much messier than normal. But it wasn't immediately obvious that galaxies actually do anything as interesting as merge.

After all, this fantastic physical process takes hundreds of millions of years to play out, so the few short decades that we've been observing them simply isn't enough time to watch the drama unfold in real time. For quite a while, astronomers didn't know if galaxies were actively merging or if a fraction of galaxies just looked all weird and gangly and that's the way the universe worked.

Simulations ultimately unraveled the mystery of tangled galaxies. But surprisingly, it was not digital simulations that did so; these simulations didn't use a computer.

The year was 1941, and proto-computational-scientist Erik Holmberg wanted to examine the behavior of merging clusters of stars. But he couldn't just manufacture a bunch of stars in the lab and watch them interact gravitationally over millions of years.

So Holmberg got clever. To represent a galaxy, he arranged a couple dozen lamps. Each lamp stood in for trillions of solar masses of stars, gas, dust and other assorted members of the galactic milieu. Then, he related the brightness of each lamp to the gravitational attraction of that galaxy chunk; the more massive the chunk, the brighter the lamp.

Holmberg proceeded to measure the total amount of light falling on each lamp from all of the others. This was proportional to the gravitational force from the other parts of the galaxy. This trick worked because both light and gravity follow the same inverse-square relationship: If the distance from a source doubles, both the strength of gravity and the intensity of light drop to a quarter of the original. Holmberg could then rearrange each lamp step-by-step based on the measured "gravitational pull" of the surrounding lamps.

A tale of tidal tails

In this very crude and simplistic way, Holmberg could step through the eons, watching the interplay of two galaxies as they mixed and mingled via gravity. And he saw an interesting feature: An "arm" of stars reached out between the galaxies as they drew near, with a "counterarm" appearing on the opposite side of each galaxy. While the results were intriguing, he didn't have the computational horsepower to investigate further.

It wasn't until the 1970s that two brothers, Alar and Juri Toomre, revisited the issue. Using actual computers to simulate the behavior of merging galaxies, they found the smoking gun: When two galaxies merge, the gravitational interactions raise "tidal tails" of gas and stars — long, thin ropes of material flung outward from the tight embrace of the spiral arms over the course of the merger event. These simulated tails looked almost exactly like pictures of intriguing objects such as the Antennae galaxies.

The picture was clear: Galaxies merge, collide and mingle. And when they do, they get ripped apart.

The force of gravity is enough to distort the shapes of galaxies as they encounter one another. But galaxies themselves are mostly (relatively) empty space. Stars are just tiny little dots compared to the enormous volumes of space within a galaxy. When you think of these beasts colliding, don't imagine a car crash. Instead, think of two swarms of bees mixing together.

But even though the stars will generally miss each other, there can still be fireworks. Galaxies contain untold tons of gas and dust that are floating around, doing no harm, living uneventfully as nebulas.

Those nebulas can persist for ages, but if given a kick — say, from a nearby supernova shock wave or, in a more relevant example, the complex gravitational interactions as two galaxies fly through each other — they can start to collapse in on themselves, fragmenting and condensing to form a new batch of stars.

When two galaxies are merging, the star formation rate ramps up to 10 times its normal pace. In a cosmic flash, billions of new stars are born. For a brief moment, astronomically speaking, the merged galaxy will be brighter than ever before.

But all that dazzle comes at a cost. If left alone, the galaxies could keep on quietly churning out new stars year after year, sipping on their precious gaseous reserves. But the chaos of the collision forces them to use up precious supplies too quickly. Billions of new stars are born, most of them massive, only to die off shortly after the merger.

And the final result of these mergers? Grand design spiral patterns ripped to shreds. Simple flat disk tangled into a misshapen lump. A vibrant mix of old and young stars burned up with only the faint embers — dying, cool, red dwarfs — left.

Irregular galaxies, full of nothing but dim, red stars, are the leftovers of these great cosmic collisions. It's the price paid for a moment of intergalactic glory.

Learn more by listening to the episode "What happens when galaxies collide?" on the Ask A Spaceman podcast, available on iTunes and on the web at http://www.askaspaceman.com. Thanks to Jamal and Danny N. for the questions that led to this piece! Ask your own question on Twitter using #AskASpaceman or by following Paul @PaulMattSutter and facebook.com/PaulMattSutter.