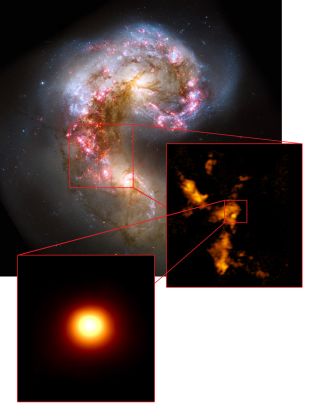 When studied with ALMA, the Antennae galaxies, shown in visible light in a Hubble image (upper left) revealed clouds of molecular gas (center right). One cloud (bottom left) is incredibly dense and massive, but shows no signs of hosting stars, making it quite possibly the first example of a prenatal globular cluster ever identified.
(Image: © NASA/ESA Hubble, B. Whitmore (STScI); K. Johnson, U.Va.; ALMA (NRAO/ESO/NAOJ); B. Saxton (NRAO/AUI/NSF))

The youngest example of one of the oldest objects in the universe may have been discovered by astronomers, who say it appears ready to hatch millions of stars.

The object, which astronomers are calling the "Firecracker," is a dense, massive cloud of molecular gas and may be the youngest example of what's known as a globular cluster. Millions of stars can form from the material inside a globular cluster, but observations show that not a single star twinkles within the depths of the newly discovered Firecracker. You can see a video of this incredible discovery on Space.com.

"We may be witnessing one of the most ancient and extreme modes of star formation in the universe," lead author Kelsey Johnson, an astronomer at the University of Virginia in Charlottesville, said in a statement. "This remarkable object looks like it was plucked straight out of the early universe. To discover something that has all the characteristics of a globular cluster, yet has not begun making stars, is like finding a dinosaur egg that's about to hatch." [Great Images of Star Explosions]

Globular clusters are common throughout the universe — the Milky Way contains over 150 known clusters, and may hide others. As the dense clouds form new stars, heat and radiation from the newborns change the environment around them, making it difficult for scientists to understand the original conditions that birthed the clusters.

Using the Atacama Large Millimeter/submillimeter Array (ALMA), Johnson and her team studied a famous pair of interacting galaxies, NGC 4038 and NGC 4039, known as the Antennae galaxies. The forces generated by the two merging galaxies, which lie approximately 50 million light-years away, trigger star formationat a rapid clip.

But in one region, dubbed the Firecracker by the researchers, star formation has yet to begin. This allows the astronomers a first-ever look at the conditions that may have led to the creation of most, if not all, of these massive clusters.

"Until now, clouds with this potential have only been seen as teenagers, after star formation has begun," Johnson said. "That meant that the nursery had already been disturbed. To understand how a globular cluster forms, you need to see its true beginnings."

While most globular clusters formed around 12 billion years ago, when the first galaxies started out, a smaller population was created in more recent times by the merger of existing galaxies. The window for formation is relatively short, as the clusters are thought to evolve out of their star-free stage within a million years. Such clouds are rare, as they may be torn apart by gravitational forces.

"The survival rate for a massive young star cluster to remain intact is very low — around 1 percent," said Johnson.

"Various external and internal forces pull these objects apart, either forming open clusters like the Pleiades or completely disintegrating to become a part of the galaxy's halo."

The scientists think that the Firecracker stands a good chance of beating these odds, however. Containing more than 50 million times the mass of the sun in molecular gas, the object should be dense enough to withstand destructive forces and eventually begin to form new stars.

The research has been accepted for publication in an upcoming issue of the Astrophysical Journal.