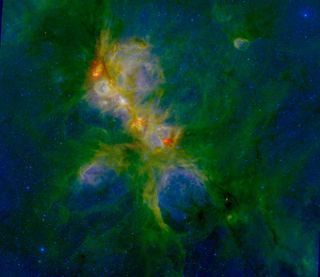 INDIANAPOLIS — A nebula that shines about 5,500 light-years from Earth could be going through a "baby boom," according to a new study.

NGC 6334 (the Cat's Paw Nebula) might be one of the most productive star-forming regions in the Milky Way. The nebula is home to tens of thousands of newly formed stars and plays host to about 200,000 suns' worth of star-creating material.

"NGC 6334 is forming stars at a more rapid pace than Orion — so rapidly that it appears to be undergoing what might be called a burst of star formation," the study's lead author Sarah Willis of the Harvard-Smithsonian Center for Astrophysics (CfA) and Iowa State University said in a statement. "It might resemble a 'mini-starburst,' similar to a scaled-down version of the spectacular bursts sometimes seen in other galaxies."

More than 2,000 of the stars in the nebula are very young and are still trapped inside the "dusty cocoons" that birthed them, scientists said. Willis presented the new findings here today (June 5) at the 222nd meeting of the American Astronomical Society.

Astronomers have observed distant, bright starbursting galaxies before, but because the Cat's Paw Nebula is a region within the Milky Way, scientists can get a better sense of why starburst regions might form and what they look like closer-up.

"Because NGC 6334 is nearby, astronomers can probe it in much greater detail, even down to counting the numbers of individual stars of various types and ages," CfA officials wrote.

Astronomers are still trying to investigate the origin of the starburst. Some researchers think that a blast from a supernova explosion or galactic collisions could create starbursts; however, neither of those explanations appear to explain the Cat's Paw Nebula's recent activity.

Scientists expect that the starburst will last for a relatively short amount of time in cosmic terms. In total, NGC 6334's burst will probably endure for only a few million years.

"We’re lucky, not only because it’s nearby but also because we’re catching it while the starburst is happening," Willis said.