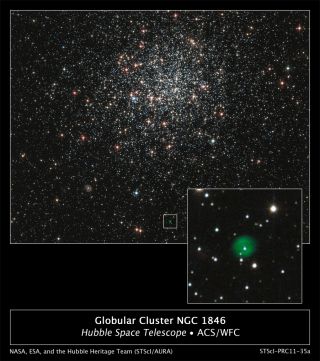 A new NASA Hubble Space Telescope image shows globular cluster NGC 1846, a spherical collection of hundreds of thousands of stars in the outer halo of the Large Magellanic Cloud, a neighboring dwarf galaxy of the Milky Way that can be seen from the southern hemisphere.
(Image: © NASA and the Hubble Heritage Team, STScI/AURA; Acknowledgment: P. Goudfrooij, STScI)

A new Hubble Space Telescope image shows off the striking globular cluster NGC 1846, which lies 160,000 light-years away in the constellation Doradus.

This spherical collection of hundreds of thousands of stars lies in the outer halo of a dwarf galaxy called the Large Magellanic Cloud, which neighbors our own Milky Way. NGC 1846 is visible in the southern sky.

The bright red and blue dots in this cluster represent luminous, aging stars. The whitish ones, in turn, are middle-aged (for a star that means they average about a billion years old!).

Scattered around the globular cluster in the image are variously shaped galaxies that lie much farther away than NGC 1846.

Scientists are particularly intrigued by a faint green blur near the bottom center of the picture. This object is what's called a planetary nebula, which is what remains after a star has died and puffed out its outer gaseous layers. In the middle of the green bubble, a point represents the burned-out star that gave rise to the nebula.

Though researchers initially weren't sure if this nebula was part of NGC 1846, or just happened to lie along the line of sight to the cluster, measurements of the central star's speed, compared with the speeds of cluster stars, suggest it might be a member of the group.