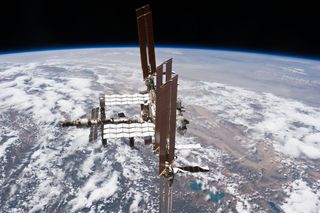 NASA astronauts Peggy Whitson and Jack Fischer will leave the International Space Station for a speedy spacewalk May 23, replacing a computer relay box that unexpectedly failed May 20.
(Image: © NASA)

Two NASA astronauts will venture outside the International Space Station today (May 23) on a last-minute spacewalk to replace a vital computer data relay box.

The spacewalk is scheduled to start at 8 a.m. EDT (1200 GMT), although it will start earlier if the crew prepares quickly, and video coverage will begin at 6:30 a.m. EDT (1030 GMT). You can watch the spacewalk live here on Space.com, courtesy of NASA TV.

NASA astronauts Peggy Whitson and Jack Fischer, who embarked on the 200th spacewalk in service of the space station two weeks ago, will head out for a comparatively speedy 201st. Compared to the usual 6.5-hour spacewalk, or their 4.2-hour trip last time, this one is set to take just 2 hours. French astronaut Thomas Pesquet will once again help from inside the station. (The trio share the space station with two Russian cosmonauts.)

One of two multiplexer-demultiplexer (MDM) data relay boxes outside the station failed Saturday. According to NASA, flight controllers tried multiple times to restore power to the box, which helps control radiators, solar arrays, cooling loops and station hardware. It's fully redundant with spare box, and control is switched over automatically to the backup box, so the crew is in no danger, NASA officials said. Nonetheless, it's important to restore that second box as soon as possible, the agency added.

Whitson prepared and tested a spare box inside the station Sunday, and she will swap it out during the spacewalk today while Kimbrough installs two wireless communications antennas on the station's Destiny lab — a task the duo didn't get to do during their last spacewalk.

In a similar spacewalk in 2014, NASA astronauts Rick Mastracchio and Steve Swanson replaced a dead MDM,zipping through the process in less than an hour.

This will be Whitson's 10th spacewalk and Fischer's second. The crew will welcome SpaceX's Dragon cargo spacecraft to the station on June 1; this spacewalk shouldn't impact that delivery, according to NASA spokesman Dan Huot.