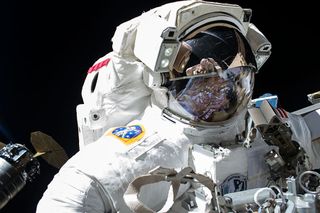 NASA astronaut Peggy Whitson is pictured with an Orbital ATK Cygnus spacecraft (left) during a May 12, 2017 spacewalk outside the International Space Station. Whitson, the station's commander, and fellow NASA astronaut Jack Fischer will conduct a repair spacewalk on Tuesday, May 23.
(Image: © NASA)

The failed device, known as a multiplexer/demultiplexer, or MDM, was installed on March 30 during a spacewalk by NASA astronauts Peggy Whitson, now the station's commander, and then-flight engineer Shane Kimbrough, who returned to Earth last month. Whitson will perform Tuesday's spacewalk repair with fellow NASA astronaut Jack Fischer  who arrived at the orbiting laboratory in April. [Watch: Whitson and Fischer Play Zero-G Water Ping Pong]

The MDM, one of two located on the outside of the station's S0 segment of the station's backbone-like main truss, controls exterior U.S. systems, including solar arrays, cooling loops, radiators and other equipment.

The upgraded MDM failed on Saturday (May 20), NASA officials said in a statement, adding that the crew was never in any danger.

"The cause of the MDM failure is not known," the statement said.

After the failure, the station switched over to the spare MDM, but NASA wants to restore redundancy as quickly as possible.

Station program managers met on Sunday to assess troubleshooting efforts and decided to replace the failed unit with a spare.

The MDM failure and replacement is not expected to impact next week's launch of a SpaceX Dragon cargo ship to the station, NASA spokesman Dan Huot said.

Launch of a Falcon 9 rocket with the Dragon freighter currently is targeted for June 1.