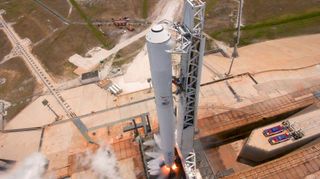 The SpaceX Falcon 9 rocket that will launch the Inmarsat 5-F4 communications satellite is test fired at Pad 39A of NASA's Kennedy Space Center in Cape Canaveral, Florida ahead of its May 15, 2017 launch.
(Image: © SpaceX)

Liftoff of the Boeing-built Inmarsat-5 F4 satellite is scheduled for 7:21 p.m. EDT (2321 GMT) from Pad 39A at NASA Kennedy Space Center in Florida. You can watch the launch live here, courtesy of SpaceX's YouTube webcast, beginning at about 7:06 p.m. EDT (2306 GMT).

Getting the satellite, which weighs about 13,500 lbs. (6,100 kg), into its intended orbit will not leave the Falcon 9 first-stage with enough fuel to attempt a landing, either on a drone barge or on the ground, SpaceX representatives said.

Inmarsat-5 F4 initially was slated to launch aboard SpaceX's larger Falcon Heavy booster, which will use three Falcon 9 first-stages as a core vehicle. The Falcon Heavy is now expected to debut before the end of the year, SpaceX representatives said.

For tonight's launch, the Falcon 9 is expected to deliver Inmarsat-5 F4 into an initial parking orbit from where it can maneuver into an operational perch 22,236 miles (35,785 km) above Earth. The satellite is the fourth and final member of Inmarsat’s $1.6 billion Global Xpress constellation, which provides broadband communications for ships, airplanes and ground stations worldwide.

The first three Global Xpress satellites, which launched in December 2013, February 2015 and August 2015 respectively, all flew aboard Russian Proton rockets from the Baikonur Cosmodrome in Kazakhstan.

Inmarsat-5 F4, which is Inmarsat's first launch with SpaceX, had been slated to fly last year, but was delayed by the loss of a Falcon 9 rocket and Spacecom’s AMOS-6 communications satellite during a prelaunch engine test on Sept. 1. The accident heavily damaged SpaceX's primary launch pad at Cape Canaveral Air Force Station in Florida, just south of NASA's spaceport.

Delays after the accident cost SpaceX a second launch with Inmarsat. In December, Inmarsat switched launch of a satellite for the European Aviation Network and Greece's Hellas-Sat onto an Arianespace Ariane 5 booster that is slated to fly in late June.

"Following the delay in SpaceX's launch schedule, Inmarsat and Hellas-Sat took the decision to move the condosat to an Arianespace launch," Inmarsat representatives said in a Dec. 8 press release.

Tonight's launch will be the sixth of more than 20 missions planned by SpaceX this year and the 34th flight since the Falcon 9 rocket debuted in June 2010.