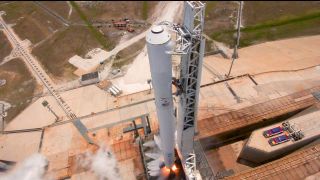 SpaceX performed a static-fire test of a Falcon 9 rocket on May 11, 2017, keeping the booster on track to launch the Inmarsat 5 F4 communications satellite on May 15.
(Image: © SpaceX)

SpaceX test-fired a Falcon 9 rocket today (May 11), keeping the vehicle on track for a liftoff Monday evening (May 15).

The company performed the standard "static fire" test early this afternoon at Launch Complex 39A, a historic pad at NASA's Kennedy Space Center in Florida that once hosted Apollo moon launches and space shuttle liftoffs.

If everything goes according to plan, the two-stage Falcon 9 will blast off Monday, carrying the Inmarsat 5 F4 communications satellite to orbit. The launch window opens at 7:20 p.m. EDT (2320 GMT) Monday and closes 50 minutes later.

Unlike most of SpaceX's recent liftoffs, Monday's mission won't feature a touchdown attempt by the Falcon 9's first stage. (Note the lack of landing legs on this particular booster.) The Falcon 9 apparently won't have enough fuel left to pull off a landing after sending the heavy Inmarsat 5 F4 to orbit.

To date, SpaceX has landed Falcon 9 first stages 10 times during orbital missions, with some of the touchdowns coming on terra firma on Florida's Space Coast and others occurring on robotic ships at sea. The company has even re-flown one of those landed boosters, employing a used first stage during the successful March 30 launch of the SES-10 communications satellite.

Such activities are part of the company's effort to develop fully and rapidly reusable rockets — technology that SpaceX founder and CEO Elon Musk has said could cut the cost of spaceflight dramatically.

Monday's launch will be SpaceX's sixth of 2017, and its fifth from Pad 39A. In 2014, SpaceX signed a 20-year lease for the pad, which, before SpaceX's launches, NASA last used in July 2011 for the launch of STS-135, the final mission of the space shuttle program.