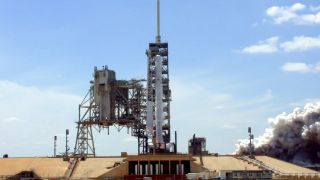 Breaking a 10-year monopoly by United Launch Alliance (ULA), SpaceX will launch a satellite into orbit on a classified mission tomorrow morning (April 30) from Kennedy Space Center in Florida, and the company will attempt to land the Falcon 9 rocket's first stage again after use.

You can watch the historic launch live here on Space.com, courtesy of SpaceX. The launch window opens at 7 a.m. EDT (1100 GMT) and closes at 9 a.m. EDT (1300 GMT). The Falcon 9 rocket will carry a payload from the National Reconnaissance Office (NRO), designated as NROL-76. SpaceX's webcast will begin about 20 minutes for launch, and also be streamed live: http://www.spacex.com/webcast.

After the launch, SpaceX's webcast is expected to follow the landing of the rocket's first stage on a nearby designated landing pad about 8 minutes after launch, where it would become the fourth to land successfully at that location. Based on the agency's past requests for similar missions, public announcements of the classified satellite may stop a few minutes after launch. [The Most Dangerous Space Weapons Concepts Ever]

ULA has launched every dedicated U.S. military and national security satellite for the past 10 years; SpaceX's Falcon 9 rocket was certified to launch military satellites in 2015, giving it the ability to bid on military launches. SpaceX and NRO have not revealed the contents of the NROL-76 mission or the precise launch time within the window.

According to SpaceNews, this might not be the first classified cargo to fly on a SpaceX rocket — a small NRO cubesat flew in 2010 on a Falcon 9 during a demonstration flight — but it is the first dedicated spy-satellite launch. SpaceX has two upcoming launch contracts with the U.S. Air Force to launch GPS-3 satellites into orbit.

The rocket will launch from Pad 39A, the historic launchpad used by several Apollo moon missions and space shuttle flights. The company's first launch from that location, which SpaceX recently leased and refurbished, was a space station resupply mission, which lifted off in February. Also from Pad 39A, in March, SpaceX relaunched a previously used rocket stage for the first time, lofting a communications satellite into orbit.