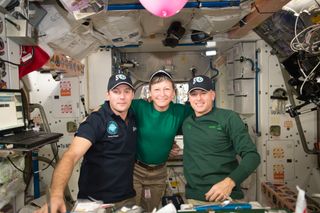 NASA astronaut Peggy Whitson poses with NASA astronaut Shane Kimbrough, right, and French astronaut Thomas Pesquet. Kimbrough will hand off command of the International Space Station to Whitson on April 9, when she will become the first woman to command the station twice.
(Image: © NASA)

Whitson became the first female space station commander during Expedition 16 in 2008, and she will step back into that role today at 10:40 a.m. EDT (1440 GMT) during a change-of-command ceremony. In between, there has been one other female space station commander, Sunita Williams. Whitson will take over from NASA astronaut Shane Kimbrough, who is about to depart the station. You can watch the ceremony live on Space.com, courtesy of NASA TV.

You can also tune in tomorrow, April 10, at 12:15 a.m. EDT (0415 GMT) to watch Kimbrough and Russian cosmonauts Sergey Ryzhikov and Andrey Borisenko bid farewell to the space station crew and close the hatch to the Russian Soyuz spacecraft that will take them back to Earth.

The trio will leave Whitson in charge, with two other crewmembers: French astronaut Thomas Pesquet and Russian cosmonaut Oleg Novitskiy. NASA recently extended Whitson's stay on the station by three months. Now, she will be there to welcome incoming crewmembers Jack Fischer, of NASA, and Fyodor Yurchikhin, from Russia, when they arrive April 20, and will leave with them in September.

Besides being the first woman to command the space station and the first woman to do so twice, Whitson has broken a number of other records: She's the oldest woman to go to space. She's spent the most cumulative time spacewalking of any female astronaut, and soon she will also beat Jeff Williams' record for the most time spent in space by a U.S. astronaut of any gender.