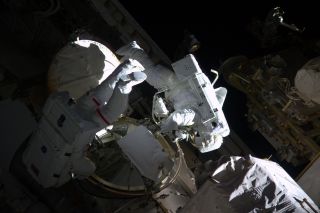 NASA astronauts Shane Kimbrough (left) and Peggy Whitson (right) took a spacewalk on March 24, 2017. Whitson broke the record for the most total spacewalking time for a female astronaut during the spacewalk, which was the eighth of her career.
(Image: © ESA/NASA)

NASA astronaut Peggy Whitson set a new spacewalking record for women in space Thursday (March 30) as she and fellow NASA astronaut Shane Kimbrough ventured outside the International Space Station for the second time in seven days.

The pair set out at 7:29 a.m. EDT (1129 GMT) and spent 7 hours and 4 minutes working outside the orbiting lab. Four hours and 23 minutes into the mission, Whitson broke the record for cumulative spacewalking time by a female astronaut. NASA astronaut Suni Williams held the record previously, with a total of 50 hours and 40 minutes. Whitson, having completed her eighth spacewalk, shattered that record, racking up a total of 53 hours and 22 minutes.

Today's spacewalk wrapped up some ongoing work to get the space station ready to accommodate commercial spacecraft. This work began with the last spacewalk, on March 24, during which Kimbrough disconnected cables and electrical connections on the Pressurized Mating Adapter 3 (PMA-3), which was relocated with the space station's robotic arm two days later. Despite a successful mission, the spacewalk wasn't all triumphs — the astronauts accidentally lost some equipment in the vacuum of space.

With the PMA-3 in place at the Harmony module, Whitson finished installing it by reconnecting those cables. She also removed and stowed PMA-3's thermal cover to make room for the new International Docking Adapter that is scheduled to arrive by 2018. Little did she or mission control know, but that protective cover would come in handy later, when things didn't quite go according to plan.

After Kimbrough finished installing a new external computer, he and Whitson met at the airlock to retrieve two pairs of axial shields, which they lugged over to Node 3, or the Tranquility module, where PMA-3 was previously located. Removing PMA-3 left the docking port at Node 3 exposed, and these shields provide protection from micrometeoroids. Before the spacewalkers could strap down the shields, one accidentally slipped away and drifted out of reach.

"Peggy, I don't have a shield," Kimbrough said with a groan. Whitson looked around and located the rogue piece of equipment. "Ah... it is right by the radiator," she said. "It is moving station zenith [space-ward], maybe half a foot a second." She later questioned whether a mix-up between the grounding strap and a similar-looking strap on the shield might have led to the shield's escape.

Thankfully, ground control crews at NASA's Johnson Space Center in Houston came up with a solution on the spot. They asked the spacewalkers to retrieve the cover Whitson had removed from PMA-3 and wrap it over the exposed portion of Node 3. The EVA (extravehicular activity, or spacewalk) task team "brought out some replicas of the equipment on board and figured out the exact dimensions and were able to come up [in]  real-time — while the EVA was going on — all of these procedures to cover up that exposed spot," NASA TV commentator Gary Jordan said. The axial measures about 5 feet (1.6 meters) long, 2 feet (0.6 m) wide and 2.6 inches (6.6 cm) thick.

Now the cloth shield is orbiting Earth ahead of the space station and poses no threat, Jordan said. The makeshift cover will work for now, as it's made of the same material as the lost shield and retrofitted to the port with tethers. Whether the shield will need to be replaced with future missions is yet to be determined "[The] team will assess how permanent the PMA-3 cover solution will be and assess a forward plan, NASA spokesman Dan Huot told Space.com in an email, adding that it's "too early to make the call.”

Despite the setback, these two experienced spacewalkers breezed through all of their assigned tasks and even had time for one "get-ahead" task, in which they took some photos to survey the common berthing mechanism at Node 2, or the Harmony module, where PMA-3 now resides. These photos will help NASA assess what future work will need to be done before commercial spacecraft can dock there.