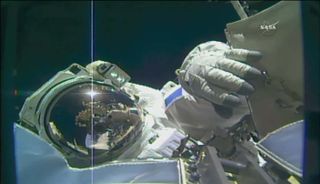 Two astronauts wandered outside the confines of the International Space Station today (March 24), embarking on the first of three spacewalks scheduled to take place over the next few weeks.

European Space Agency astronaut and flight engineer Thomas Pesquet led the way when he emerged from the station's Quest Airlock at 7:22 a.m. EDT (1122 GMT). NASA astronaut Shane Kimbrough, commander of the station's Expedition 50 crew, popped out of the airlock shortly after, and the two spacewalkers parted ways to carry out separate tasks around the orbiting lab.

While Kimbrough breezed through his to-do list with enough time left for a "get-ahead" task, Pesquet's tasks kept him busy the entire time. "It was a long spacewalk," NASA spokesman Dan Huot said of the session, which took 6 hours and 34 minutes, during live commentary. NASA astronaut Peggy Whitson assisted with the spacewalk, first by helping them suit up and head out the door, and later by operating the station's robotic arm. [Space Station Photos: Expedition 50 Astronauts in Action]

The primary goals of this spacewalk and the next one, which is scheduled for March 30, are to prepare the space station for the future docking of commercial spacecraft, such as SpaceX's Crew Dragon and Boeing's CST-100 Starliner.

Kimbrough was tasked with disconnecting the Pressurized Mating Adapter-3 (PMA-3), which allows different kinds spacecraft to use the space station's docking ports. This Sunday (March 26), ground crews will operate the station's Canadarm2 robotic arm to move PMA-3 from the Tranquility module to the Harmony module.

During the next spacewalk, on March 30, Kimbrough and Whitson will connect PMA-3 to its new home at the Harmony module, where NASA plans to install a new International Docking Adapter for commercial spacecraft by 2018. "PMA-3 provides the pressurized interface between the station modules and the docking adapter," NASA officials said in a statement.

Kimbrough kicked off his spacewalk by heading to the Starboard-0 (S0) truss to replace an old, external backup computer called Multiplexer-Demultiplexer (MDM). The new computer unit, called the Enhanced Processor and Integrated Communications (EPIC MDM), has upgraded software for the new docking adapter, EVA-40 spacewalk officer Sarah Korona said during a news conference on Wednesday (March 22). Kimbrough will replace a second MDM unit with another EPIC MDM during his next spacewalk, on March 30. After replacing the MDM computers, Kimbrough made a pit stop at the airlock to drop off the old computer before moving on to PMA-3.

Meanwhile, Pesquet spent his day doing maintenance unrelated to PMA-3. First, he grabbed a foot restraint from an external stowage platform before making his way over to the P1 truss to investigate a suspected ammonia leak from a radiator valve in the station's cooling system.

"We've been tracking a small rate of leakage from that ammonia system over the last year or so, and our external robotics systems have determined a most likely location where the system may be leaking," NASA Flight Director Emily Nelson said at the news conference. "It's time to get crewmember eyeballs on the area and get a human evaluation to determine whether we have any damage to the system."

Pesquet jostled a set of hoses in the station's radiator heat belt monitor, the suspected source of the leak, in an effort to rattle loose any possible flakes of frozen ammonia. After looking for the leak for about 2 hours, he found no signs ammonia outside the space station. Just to be sure, he carried a high-definition GoPro camera to capture footage for ground crews to investigate the scene more closely. [Astronaut's-Eye View: Stunning Spacewalk Video from Space]

With no ammonia in sight, Pesquet moved on to the space station's Special Purpose Dexterous Manipulator, also known as Dextre, which is an extension of the Canadarm2 robotic arm. The two-armed, remote-controlled robot was in need of a little routine maintenance, so Pesquet applied lubricant to the latching end effector (LEE), or the "hand" at the end of the robotic arm. He spent nearly 4 hours using the ballscrew lubrication tool to inject grease into the LEE. Things got a little messy at this point, so Pesquet had to wipe up grease that was oozing from the machine.

As Pesquet worked on the robotic arm, Whitson controlled it from inside the space station. She brought Dextre closer to Pesquet, who could barely reach it even with an extended foot restraint.

Because Kimbrough was doing better on time than Pesquet, he did his fellow spacewalker a favor by fetching a bag of tools that Pesquet would need for his work at the robotic arm, saving Pesquet an extra trip back to the airlock in between tasks. Then, Kimbrough went to the Japanese Kibo module for his "get-ahead" task, in which he replaced two cameras that had broken lights. The lights will be replaced inside the space station and can still be used in the future, but replacing them in space isn't very practical.

The two spacewalkers finally made it back to the airlock for good, ending the mission at 1:58 p.m. EDT (1758 GMT). Kimbrough completed his fifth spacewalk today, with a total of 32 hours spent doing EVAs (short for "extravehicular activities"). This was Pesquet's second spacewalk, and he now has a total of 12.5 hours of EVA experience.

Despite a few minor hiccups, the spacewalk was a great success, with the astronauts accomplishing every task plus one optional task. "Shane Kimbrough had some sticky connectors, and the foot restraint has been a bit unwieldy at times for Thomas Pesquet," Huot said. But nothing happened that prevented them from doing everything they needed to do.

On Thursday (March 30), Kimbrough and Whitson will continue EVA work with PMA-3 while Pesquet assists from inside the station.