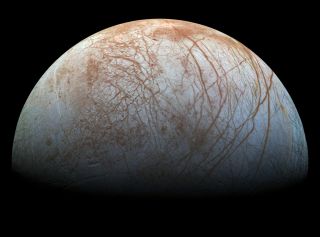 Jupiter's ocean-harboring moon Europa, as seen by NASA's Galileo probe. The space agency plans to launch a mission to Europa in the 2020s, to assess the world's potential to host life.
(Image: © NASA/JPL-Caltech/SETI Institute)

President Donald Trump has a chance to make a historic mark on NASA science and the future of space exploration in general, experts say.

Many of NASA's high-profile robotic exploration missions are scheduled to end over the next few years, and there's not much in the pipeline to replace them, said Casey Dreier, director of space policy for The Planetary Society, a nonprofit organization that seeks to advance space science and exploration.

"We're in this period where we really need to start rebuilding lots of science programs for the next generation," Dreier told Space.com. "This administration has the opportunity to basically help set the next decade of planetary and astrophysics exploration at NASA." [Watch: Bill Nye's Space Ideas for President Trump]

Some of NASA's biggest, boldest and most accomplished robotic missions will be saying goodbye soon.

For example, the $3.2 billion Cassini-Huygens mission, which has been orbiting Saturn since 2004, will end with an intentional death dive into the ringed planet's atmosphere this September. And the $1.1 billion Juno Jupiter mission is scheduled to perform a similar suicidal plunge in February 2018, after having studied the solar system's largest planet from orbit for more than 18 months.

The $700 million New Horizons mission, which captured the first-ever up-close photos of Pluto during its July 2015 flyby, will have a close encounter with a second faraway object, known as 2014 MU69, in January 2019. But the probe's current extended mission is scheduled to end two years after that, in 2021.

And the Curiosity rover, the centerpiece of NASA's $2.5 billion Mars Science Laboratory mission, has already been exploring the Red Planet for more than 4.5 years and can't be expected to chug along forever (even though its smaller cousin, the indefatigable Opportunity, has logged more than 13 years on Mars and is still going strong).

NASA has a few big-ticket items on the robotic docket in the relatively near future. For instance, the agency is eyeing an early-to-mid-2020s launch for Europa Clipper, a $2 billion mission that will assess the habitability of Jupiter's ocean-harboring moon Europa during dozens of flybys. (Congress has also instructed the agency to send a lander to Europa; NASA is currently studying the best ways to do this.)

But a "true Mars program" would also involve the development of another Mars orbiter to help relay this future rover's data back to Earth, as well as a mission to bring the collected samples home, Dreier said.

"Those are nowhere to be seen, and that's a big worry on our part," he said.

And overall, NASA's astrophysics and planetary-science cupboard will be fairly bare in the near future if things don't change soon, Dreier added.

"It looks good right now, but the pipeline is diminished; the pipeline is narrow," he said. "We need to increase the pipeline of future missions, or else we're going to find ourselves bereft of exploration in the 2020s."

The Planetary Society has some ideas for how the Trump administration could best aid NASA's science and exploration work.

If enacted, such increases would boost the agency's current budget of about $19 billion to $24.2 billion by 2022. Such an outcome is not out of the realm of possibility, Dreier said.

"The last three years, Congress has provided more money for NASA than what the Obama administration requested," he said. "And in 2015, they gave it a 7 percent increase over the year before."

Nye also advised Trump to help strengthen and expand NASA's science portfolio. Specifically, The Planetary Society wants the president to propose allocating 30 percent of the NASA budget to the agency's Science Mission Directorate. (This recommendation and many others are detailed in a newly published Planetary Society white paper.)

Right now, it's unclear what Trump's space priorities will be. He still hasn't appointed a NASA administrator, and his public statements about space exploration consist primarily of two fleeting mentions: In his inaugural speech, the president said the nation stands "ready to unlock the mysteries of space," and in his first address to a joint session of Congress last month, he stated that "American footprints on distant worlds are not too big a dream."

In addition, the president's advisers have said that the Trump administration aims to slash, or perhaps even eliminate, NASA's Earth-science program — one of four divisions in the Science Mission Directorate.

Dreier said he hopes The Planetary Society's open letter and white paper will help show the Trump administration the value of all of NASA's space science and exploration work. Indeed, policies enacted during the next four to eight years could end up helping to answer some of humanity's biggest questions, Dreier and Nye said.

"If you double down and invest in a life-detection mission with the Europa lander, that can be a legacy: 'My administration promoted, funded and launched, or allowed to launch, this mission that maybe would discover life on another world,'" Dreier said.