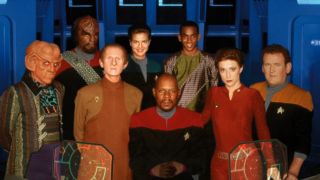 After nearly quadrupling their Indiegogo goal to produce a new documentary on "Star Trek: Deep Space Nine" (DS9), the creators are busy trying to figure out how to best deploy their newfound wealth.

Today (March 10) is the final day of the campaign to produce "What We Left Behind," and backers on the crowdfunding site have raised more than $575,000 for the film. The show is co-led by DS9 showrunner Ira Steven Behr, produced by David Zappone and directed by Adam Nimoy. Zappone and Nimoy are known for the 2016 documentary "For The Love of Spock," and Zappone also produced the 2011 "Star Trek" documentary "The Captains."

In an interview with Space.com, Behr and Nimoy, who is the son of the first "Star Trek" series' actor Leonard Nimoy, said they are reconfiguring their plans for the now 90-minute documentary, which is 30 minutes longer than their original vision, because of the extraordinary response to the crowdfunding effort. Among other things, they plan to convert several clips of DS9 to high resolution, conduct more extensive interviews with cast and crew and possibly add 6 hours of extras following the DS9 creators as they lay out a plot for a mythical "Season 8" for the long-running series. [The Evolution of 'Star Trek' (Infographic)]

The documentary creators are also combing the CBS archives and other sources to see what additional DS9 material is out there, in a process similar to the one "For The Love of Spock" followed. The documentary is going forward with full CBS support and includes participation from several members of the DS9 cast and crew.

'What they did really had value'

Behr added that it is gratifying to see the fan response to the project, 20 years after DS9 was on the air.

DS9 was darker than the predecessor "Star Trek" series, featuring arguments between crew members, a long-standing war that resulted in refugee camps, and action that was confined to a space station instead of a far-ranging starship. The Indiegogo campaign says the show was sometimes called "the black sheep" of the "Star Trek" family since it did not have the optimistic tone of series founder Gene Roddenberry's original vision, which persisted for two decades and two shows. The show carried the "Star Trek" flag alone for only a few months, as it started when "The Next Generation" was finishing and was soon joined by "Star Trek: Voyager" (which outlasted DS9.)

"The people involved in the [DS9] show are [today] realizing that what they did really had value," Behr said, adding the recent response from fans "is changing everything" for the new documentary.

"To be different, to push the envelope, does not mean you're going to be met with hugs and kisses all the time," he added. "Fans want what they like, and when you give them change, it takes them a little while to accept it."

Nimoy, who said he was busy directing other shows at the time and saw only a handful of DS9 episodes in the 1990s, has been binge-watching the show lately to catch up. He told Space.com it was ahead of its time.

"You see serialization, arcs for characters — some of the supporting cast had their own character arcs. These are not stand-alone episodes," he said, adding that those storytelling elements were rare when DS9 was on the air.

"I love the conflict between the characters," added Nimoy, saying it reminds him of Spock and McCoy's tiffs in the original "Star Trek" series. Nimoy's father, who played played Spock, died in 2014.

The film's creators haven't established a firm timeline for its release, but Nimoy said the team is pushing aggressively to create a version for the science-fiction film circuit this summer. A full version should be ready by the fall, he added.

You can contribute to the project on the Indiegogo site.