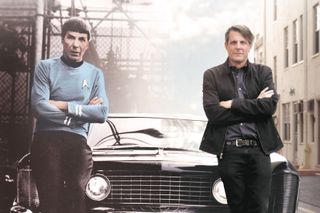 The Kickstarter-funded documentary "For the Love of Spock" premiered at New York City's Tribeca Film Festival April 16. The film explores Spock actor Leonard Nimoy's legacy and his relationship with his son, Adam (right).
(Image: © For the Love of Spock)

NEW YORK — As the credits rolled in "For the Love of Spock" — a new documentary honoring Leonard Nimoy and the beloved "Star Trek" character he portrayed — a long, long list of names scrolled by to the tune of David Bowie's "Starman," sung by Nimoy's grandson.

But unlike in the credits of most films, the names were not just those of actors and production crew, but of the nearly 10,000 backers who funded the movie through Kickstarter. Indeed, the documentary was always made for the character's many fans, said Nimoy's son, Adam Nimoy. After a screening last night (April 18), Adam Nimoy took the stage to describe the documentary's evolution and the tricky balance between exploring Leonard Nimoy as an actor and as a father, and talked about the world's fascination with his father's most famous character, the logical alien Mr. Spock.

"That's really what the film is about," Adam Nimoy told the audience here at the Tribeca Film Festival screening. "It's my gift to the fans to celebrate and to process the loss of my dad." [Vulcan Salute: Astronauts Honor Leonard Nimoy from Space (Photos)]

For The Love Of Spock Teaser from 455 Films on Vimeo.

Adam Nimoy was joined on the stage by actor Zachary Quinto, who portrayed Spock in the recent reboot series of the "Star Trek" films (starting in 2009). Quinto worked closely with Nimoy to develop his character for the film. Also on stage were the documentary's producer, David Zappone and Scott Mantz, a film critic and "Trek" fan. Gordon Cox, an editor at Variety, moderated the panel.

The film, which premiered at the Tribeca Film Festival on April 16, follows Leonard Nimoy's path to "Star Trek" and the depiction of his character chronologically. Throughout the film, the narrative is diverted to talk about the pop-culture impact of Spock at different moments in time and the personal history of Nimoy's interactions with his family and son. The exposition was interspersed with clips from the show — whether to illustrate an aspect of Nimoy's acting or the show's makeup, or just to give a humorous reaction to the events on screen.

The documentary started out as a collaboration between Leonard Nimoy and Adam Nimoy, and was initially intended only as an exploration of Spock's character. But after the elder Nimoy's death in 2015, the film's focus changed.

"I was overwhelmed by the response of emotion from fans all over the world — not only about the loss of this pop-culture icon but about the loss of Leonard Nimoy the artist, the humanitarian. And it was clear to me, at that point, that I had to expand the film to include his life and his legacy," Adam Nimoy said. And with that, he said, came a need to impart his own perspective as Nimoy's son. By describing their relationship in the documentary, he was able to illustrate the impact playing Spock had on his father's life.

Mantz, a "Star Trek" fan since age 6, was particularly moved by the deep connection he saw between Nimoy and the character he portrayed. "It was not just a job for him," Mantz said. "This was something that was very, very personal — that was why he created the Vulcan salute." (In the movie, Nimoy discusses inventing the gesture on set, based on a gesture he saw at religious services in his childhood.)

The panelists discussed the inspiration Spock offers to outsiders and the logical-minded among "Star Trek" fans. For example, one scene in the movie explores the character's impact on engineers at NASA's Jet Propulsion Laboratory. They panelists also mused about whether individuals are fundamentally Spock or Kirk fans, and how that can change with the shifting priorities of adolescence.

They also probed the differences between Nimoy's Spock, who had a very tight hold on his emotions in the original series, and the new Spock portrayed by Quinto. (Quinto, by the way, sheepishly admitted to being mostly a "Star Wars" fan in his youth — but is a burgeoning "Trek" fan now.)

"I think that the humanity in my version of [Spock] is a little bit more bubbling to the surface," Quinto said. "That was a choice, and we really talked about that — this idea of the duality of the character internally. Leonard and I would talk about that."

That balance changes over the course of the films, including in the upcoming "Star Trek Beyond," Quinto said. Nonetheless, the fundamental appeal of the character is the same for both Spock incarnations. "I think that part of what makes Spock so compelling is his humanity," Quinto said, "even though it's sublimated in certain ways."

Adam Nimoy said he was a fan right from the show's start, even though he avoided "Trek" conventions for a long time. To him, the mass adoration of his father's character was moving, but it was also disconcerting. The documentary explores the fans' love both as a destabilizing force in Adam Nimoy's life and as a powerful statement of the character's universality. Indeed, besides Spock and Nimoy himself, the fans are the third main character in the film.

Zappone, the film's producer, created several films with William Shatner as well (who played Capt. Kirk in "Star Trek"). In one film, about "Star Trek" conventions, "Shatner comes to the conclusion that it's religion," Zappone said. "It's really a modern mythology." And for fans engrossed in all aspects of that mythology's creation, "For the Love of Spock" offers a rare opportunity to dive deep.