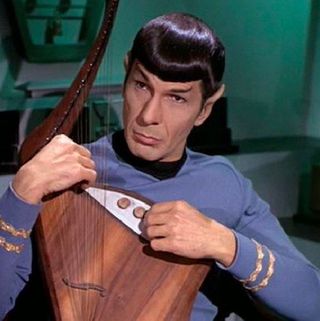 Actor Leonard Nimoy, who portrayed the iconic logical Vulcan Spock on TV's "Star Trek" and in feature films, has died. He was 83.

Nimoy's career spanned TV, feature films, art and photography, but he was perhaps best known for playing Spock, the logical Vulcan on the starship the USS Enterprise, in "Star Trek." Nimoy died from complications due to "end-stage chronic obstructive pulmonary disease," according to the New York Times, which first reported the actor's death Friday morning (Feb. 27).

"A life is like a garden. Perfect moments can be had, but not preserved, except in memory. LLAP [Live long and prosper]," Nimoy wrote in a recent post on Twitter on Feb. 23. The actor would sign his tweets "LLAP," echoing Spock's famous words on "Star Trek." [President Obama, space experts react to Nimoy's death]

Nimoy was born in Boston, Massachusetts on March 26, 1931 and started acting by the time he was 8 years old, according to the New York Times.

His idea for Spock's signature Vulcan salute was actually inspired by his Jewish heritage after seeing men at his synagogue use the hand gesture during prayer. He suggested it to the director as a Vulcan greeting and it stuck, Nimoy told the Yiddish Book Center in a video.

Aside from being a beloved science fiction star, Nimoy also got involved with real space science. He narrated a video for NASA detailing the space agency's Dawn mission to the dwarf planet Ceres for the first time.

NASA paid tribute to the actor today with a post on Twitter featuring a photo of Nimoy and his "Star Trek" co-stars in front of the space shuttle Enterprise, named for the fictional starship in the television show. In April 2012, Nimoy greeted the space shuttle Enterprise with a Vulcan salute when the spacecraft prototype was delivered to New York City for installation at the Intrepid Sea, Air and Space Museum.

"RIP Leonard Nimoy. So many of us at NASA were inspired by Star Trek. Boldly go ..." NASA officials wrote on Twitter.

Nimoy's friends and colleagues have posted their feelings about the "Star Trek" legend on social media as well.

"I loved him like a brother," William Shatner, who played Captain Kirk alongside Nimoy's Spock on the TV show, said via Twitter. "We will all miss his humor, his talent, and his capacity to love."

"Today, the world lost a great man, and I lost a great friend," George Takei, who played Hikaru Sulu on the original series, said on Facebook. "We return you now to the stars, Leonard. You taught us to 'Live Long And Prosper,' and you indeed did, friend. I shall miss you in so many, many ways."

Nimoy also starred as Spock Prime in the J.J. Abrams directed "Star Trek" reboot released in 2009. Zachary Quinto, who plays the new Spock in the franchise, paid tribute to Nimoy on Instagram today.

"My heart is broken," Quinto wrote. "I love you profoundly my dear friend. And I will miss you everyday. May flights of angels sing thee to thy rest."