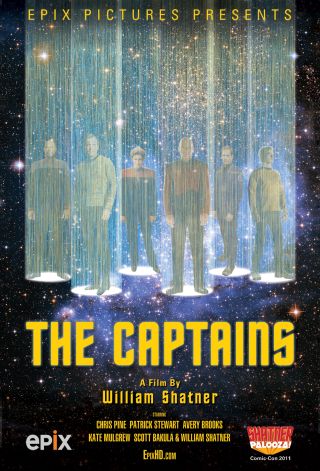 Poster for "The Captains," a documentary written and directed by William Shatner.
(Image: © EPIX)

NEW YORK – For a few hours on Saturday night (July 30), the decommissioned aircraft carrier the U.S.S. Intrepid took not to the seas again, but to the stars. In command: William Shatner, "Star Trek" Captain James T. Kirk, whose new documentary "The Captains" aired to a packed crowd on the flight deck of the Intrepid Sea-Air-Space Museum.

In the film, the former starship Enterprise captain goes on a mission of personal rather than cosmic exploration. Despite a long and award-winning acting career, Shatner's most prominent role by far remains Kirk.

To try to understand how the character has shaped his life, and vice versa, Shatner visits the five actors who also played lead captain roles in the "Star Trek" franchise's television series and films. What unfolds is a series of intimate interviews that discuss how the actors dealt with the demands of the role, what being captain meant and how they ever got into acting at all. [See photos from the New York screening]

"My hope is to delve deeply into these actors' psyches, find out more about them so you can . . .  see what common denominator there is among us as actors that brought [us] to this worldwide renown as part of 'Star Trek,'" Shatner explained in a statement.

An all-ages crowd of more than a thousand people attended the weekend event, some of whom waited on line for two hours or more to get on board the Intrepid. Making this particular site all the more poignant is that the "actual" starship Enterprise – NASA's first prototype space shuttle that was used in landing and glide tests in the late 1970s, and was named after the sci-fi vessel – will soon be housed at the museum.

A costume contest was held for the many dozens of people who donned Starfleet uniforms and other "Star Trek" paraphernalia. One woman even wore a homemade, light-up model of the starship Enterprise atop her head. [The Top 10 Star Trek Technologies]

After the sun set, Shatner himself appeared on the deck. The aircraft carrier is much like the Enterprise in size, Shatner suggested, so "you're the crew," he said to cheers from the audience. With the "soft summer weather," the New York skyline, the ship and the film, Shatner said "it's a magical night – enjoy it."

These are the voyages

Early in "The Captains," which Shatner wrote and directed, he is shown initially meeting with his fellow captains. Segments of those interviews are then woven throughout the narrative with clips from the shows and films. Other series actors offer insights as well, while some comic relief comes courtesy of Shatner and company hamming it up at a "Star Trek" convention.

Shatner talks with Patrick Stewart – Captain Jean-Luc Picard in "Star Trek: The Next Generation" – amongst gardens and later in a den at the English actor's residence. The actors relate how each other's evident on-screen passion for his respective role has contributed to the proud legacy both feel for their involvement with "Star Trek" – a high point of the film.

Shatner talks with "Star Trek: Deep Space Nine's" lead, Avery Brooks, who played Captain Benjamin Sisko. Shatner joins Brooks – who comes off as something of an eccentric in the film – in a hilarious ad-lib duet while Brooks plunks away on a piano in his home.

Shatner last checks in with the newest inductee to the select captain club, Chris Pine, who inherited the mantle of Captain Kirk in J.J. Abrams' 2009 film reboot of "Star Trek."

"Look at you – you're me 30 years ago," Shatner said to Pine in the film as the two meet, oddly, at a table placed in the middle of a sidewalk in Los Angeles. The actors then proceed to arm wrestle over who is the better Captain Kirk.

After "The Captains" concluded, Martin Conroy, 62, said he "loved it," calling the film "touching." Conroy recalled seeing the very first episode of "Star Trek" premiere back in 1966.

Jason Gomer, 26, commented that the documentary helped show how each actor took the role of captain and "made it their own."

"They've all shared in this same thing – maybe you can call it Starfleet," said Jonathan Minkoff, 41. "Only they know what it's like to be captain."

Regarding the actors' conversations with Shatner, Judy Fontana, 32, was surprised by "the gravity of what they talked about," including mortality, something very much on the mind of Shatner, now 80 years old.

With both their light notes and deep candor, the interviews radiate genuine warmth between the actors who have portrayed some of science fiction's most storied characters.

"I had five acquaintances when I started the film," Shatner told members of the press prior to the screening. "Now I have five friends."