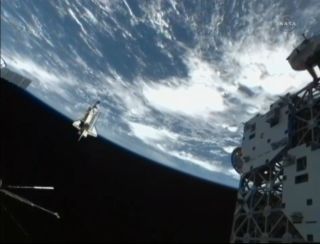 Space shuttle Discovery is seen in cameras as it flies around the International Space Station after undocking for the final time on March 7, 2011 during its last mission, STS-133.
(Image: © NASA TV)

HOUSTON – Astronauts on the space shuttle Discovery got a star-studded wakeup call from Earth today – a long-distance dedication from William Shatner, TV's original Capt. Kirk, set to the "Theme from Star Trek."

"These have been the voyages of the space shuttle Discovery," Shatner said in the pre-recorded wakeup call that mimicked his opening to 1960s "Star Trek" TV series. "Her 30-year mission: to seek out new science, to build new outposts, to bring nations together in the final frontier, to boldly go and do what no spacecraft has done before."

NASA's current shuttle mission, STS-133, is the final flight of shuttle Discovery before the spacecraft is retired later this year.

During shuttle missions, astronaut are regularly treated to a daily wakeup song, which is typically picked for individuals on the crew by their families. For Discovery's final flight, however, NASA held a public contest to choose two wakeup songs for the astronauts on the final days of their mission.

Alexander Courage's theme song from the hit TV show "Star Trek" was the runner up in the agency's online contest. Nearly 2.5 million votes were cast in the contest, which ran from Aug. 20, 2010 to Nov. 1. This morning's wakeup song garnered 671,133 votes, or 27.2 percent.

"That was, I believe, the second most popular selection from the song contest for the space shuttle program," shuttle commander Steve Lindsey said. "I'd like to thank, specifically, William Shatner, for taking the time to record that special introduction for us."

Participants in NASA's "Top 40 Song Contest" voted from a list of 40 songs that have previously awakened shuttle crews. The winning song, "Blue Sky" by Big Head Todd and the Monsters will be played for Discovery's astronauts tomorrow morning, on the last full mission day prior to the shuttle's landing. [The Astronaut's Playlist: Groovy Songs for Space Travelers]

Discovery is scheduled to land for the last time at NASA's Kennedy Space Center in Florida on Wednesday (March 9) at 11:57 a.m. EST (1657 GMT) after a 13-day mission to the International Space Station.