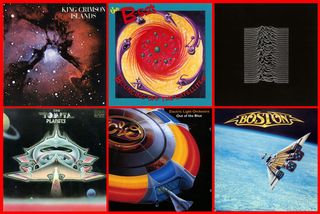 The tradition of beaming a wakeup song to astronauts soaring over our planet stretches back to the early days of human spaceflight, and NASA's final space shuttle missions this year are providing no exception.

For the first time, the public has been allowed to select the rise-'n'-shine songs for space travelers, and its choices will be played this week during the final two days of the shuttle Discovery's last mission, on its way back from the International Space Station. NASA is retiring Discovery after the flight.

The tunes reflect the diverse genres of wakeup songs over the years. Many of the songs, however, have something in common: space-themed lyrics and associations, highlighting how the final frontier has inspired generations of songwriters.

"I think there's a great deal of surprise in [the] interest that the general public seems to have in spaceflight in general, and one way that's reflected is in music," said NASA spokesman Kyle Herring. [The Astronaut's Playlist: Groovy Tunes for Space Travelers]

The top vote-getter of the NASA contest was "Blue Sky" by Big Head Todd and the Monsters, a sing written for Discovery's "return to flight" mission in 2005, the first shuttle mission after the loss of Columbia in 2003.

The runner-up was the theme to the original "Star Trek" TV series, written by Alexander Courage. It was not immediately known if the version the astronauts will hear includes William Shatner's "Space: the final frontier" voiceover.

These are the songs that will serve as wakeup calls for the Discovery astronauts on March 8, the day the crew is scheduled to check the flight control systems, and March 9, landing day.

Part of space's popularity with songwriters is that, as a metaphor, it offers of a wide range of meanings, according to musicologists.

Space imagery can have a positive connotation; the sky serves as the realm of the gods in many religions, and as the final frontier it beckons with possibility. As Jiminy Cricket sang in the 1940 Walt Disney movie "Pinocchio":

On the other hand, the cosmos can represent loneliness, the void and the alien.

"From a songwriting perspective, space is kind of a shock because it signifies the unknown," said Andrew West, course director of the world's first songwriting master's program, at Bath Spa University in the United Kingdom.

West pointed to a contrasting lyrical use of a star – a shooting star in this case, in the Bob Dylan song of the same name from the 1989 album "Oh Mercy":

"The idea of what he might be saying there is this other person is unknowable, is beyond what he can grasp," West said.

NASA has records of its wakeup calls and other songs beamed to people in space dating back to December 1965 for Gemini missions.

In the spirit of art imitating life, the space race of the late 1950s and entire 1960s fueled the rise of the "space rock." This genre is characterized by psychedelic, electronic elements and arose during a time of great cultural upheaval and technological advancement in the United States.

"There was certainly a connection between the emerging technologies in the late '60s – especially recording technology – and space," said Victor Anand Coelho, a professor of music at Boston University. "The equivalent of space travel is musical travel; artists were able to get out of their acoustical instruments and use technology in the studio to break musical gravity."

Bands such as Pink Floyd began experimenting with long, improvisational opuses, such as the not-so-incidentally titled "Interstellar Overdrive" on its  1967 debut album, "The Piper at the Gates of Dawn."

As the early standardbearers of space rock, Pink Floyd became well-known for "a lot of songs that evoke space or at least sci-fi, that use a lot of echo, long breaks and patterns," Coelho pointed out.

Space and music experienced a convergence or even a superposition in the summer of 1969 with the Woodstock music and arts festival and the Apollo 11 lunar landing, Coelho suggested. "There was a sense this was all connected," he said.

Also of note that year, a rising artist named David Bowie released "Space Oddity," one of the most famous space-themed songs. [If Aliens Exist, They Will Probably Love Bach]

Inspired by Stanley Kubrick's 1968 movie "2001: A Space Odyssey," the song relates the tale of an astronaut named Major Tom who, after reaching orbit and performing a spacewalk, decides not to return to Earth.

British television played the song during its coverage of the moon landings. "I'm sure they really weren't listening to the lyric at all," Bowie told Performing Songwriter magazine in 2003, laughing. "It wasn't a pleasant thing to juxtapose against a moon landing."

The space trend found fresh expression in the funk movement of the 1970s,  led by George Clinton and his groups Parliament and Funkadelic. They created a whole "P-Funk mythology" involving a mothership and divine alien beings named Starchild and Dr. Funkenstein who bring funk to humankind from outer space.

Many songwriters have continued to seek inspiration in the stars.

One standout is Muse. The English rockers' "Supermassive Black Hole" served as one of the wakeup calls for astronauts on the flight of the space shuttle Atlantis in May 2010.

Other spacey Muse songs include cuts from the band's 2002 album "Hullabaloo" such as "Shrinking Universe," "Dead Star" and "Space Dementia," and "Starlight" from the 2006 album "Black Holes and Revelations."

Hip-hop artists also have carried on the traditional metaphor of space as a source of otherness and power. For example, mega-selling rapper Lil' Wayne, also known as Lil' Weezy, spits in "Phone Home":

Later, the rapper talks about how he will "get in my spaceship and hover."

Canibus seemed to give a shout-out to the IceCube Neutrino Observatory in Antarctica (or a future instrument of its polar ilk) in 2007's "Poet Laureate Infinity" when he rapped:

Arctic geography is conducive to astronomy
And the study of celestial bodies, follow me.

The beat goes on and on and on

Although the space shuttle program is in its final days, the musical wellspring of the cosmos and manned spaceflight is unlikely to run dry.

Moreover, the first impression humankind makes on extraterrestrial beings might be through music, courtesy of the Golden Records cruising on the twin Voyager spacecraft. These probes left our solar system just a few years ago with phonograph records onboard that contain classical music, a Chuck Berry song and other tunes from all over our planet.

If George Clinton's guess is right, however, it is humans who stand to benefit musically from alien contact, and not the other way around.

Boston University's Coelho said his favorite space music is that which accompanied the landing of Clinton's spaceship in concerts, and it has since become a "stereotype to use a synthesizer and high notes to evoke space." Perhaps true alien music – unlike anything we have ever conjured up – will serve as a wakeup call someday for human interstellar voyagers.

Adam Hadhazy is a Staff Writer for TechNewsDaily, a sister site to SPACE.com