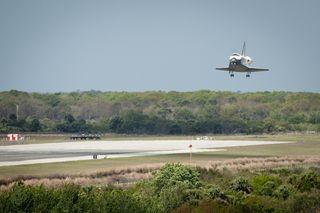 CAPE CANAVERAL, Fla. — The space shuttle Discovery has returned to Earth from its final mission, never to soar in orbit again.

In the end, Discovery — NASA's oldest and most traveled shuttle — flew its last mission the same way it flew its first: with grace and pride, and with keen eyes around the world watching it every step of the way.

The shuttle landed for the final time here at NASA's Kennedy Space Center at 11:57 a.m. EST (1657 GMT), capping a busy 13-day mission to the International Space Station. After 27 years and 39 flights, Discovery's wheels rolled to a stop for the very last time under the warm sun at the Florida spaceport's Shuttle Landing Facility.

Discovery was "a perfect vehicle from start to finish on her final flight," the mission's commander Steven Lindsey radioed Mission Control after landing the shuttle smoothly despite windy conditions.

"Great job by you and your crew. That was a great landing in tough conditions and it was an awesome docked mission that you all had," Mission Control told the crew, adding that the mission's 13 days boosted Discovery to a full year of cumulative time in space. "I think that you'd call that a fleet leader and a leader of any manned vehicle for time in orbit. So, job well done."

As the shuttle's six-astronaut crew rightly predicted, the air at the landing site was tinged with a mixture of celebration and sadness.

"It really is an honor and a privilege to be able to fly Discovery at any time, and the fact that we're on this final flight really stands out to us," mission specialist Nicole Stott said during an in-flight interview. "It's a real opportunity to celebrate the really great things that have gone on with Discovery. I think when we walk away from her on the runway, there's going to be tears in my eyes. I worked with her at KSC and the chance to fly her has just been a real, real privilege." [Gallery: Building Space Shuttle Discovery]

The next mission for Discovery will never leave Earth. NASA plans to begin preparing the shuttle for public display in a museum, likely the Smithsonian Institution's National Air and Space Museum.

Discovery is the first of NASA's space shuttles to be retired, but all three will eventually end up on display in a museum somewhere in the country. An intense competition among 29 different institutions has been under way for the limited number of shuttles. NASA will announce the final destinations for Discovery and its two sister ships on April 12 – the 30th anniversary for the shuttle program.

Discovery launched on its final mission on Feb. 24, after months of delays due to issues with the shuttle's external fuel tank. The STS-133 mission delivered supplies, hardware, a new storage room and a humanoid robot called Robonaut 2 to the International Space Station and its residents.

NASA's space shuttle fleet has been instrumental in the construction of the space station, and Discovery did its part by hauling sections of the backbone-like truss, the U.S. Harmony node, and the Japanese Kibo laboratory module.

Discovery was the first shuttle to visit the International Space Station during the orbiter's STS-96 mission in May 1999. Over the course of its space career, NASA's fleet leader returned to the orbiting outpost another 12 times.

Among its myriad accomplishments, Discovery also deployed NASA's Hubble Space Telescope in April 1990, giving mankind the ability to peer deep into the cosmos. NASA's current chief, former shuttle commander Charles Bolden, served as the pilot for that Hubble mission. He watched today as Discovery returned to Earth for the final time.

""This is very bittersweet for all of us," Bolden said on the shuttle landing strip.

Discovery also performed both return-to-flight missions after the agency's fleet was grounded following the losses of the shuttle Challenger in 1986 and Columbia in 2003.

During its 27-year operational life, Discovery spent a total of 365 days in space, putting roughly 148 million miles (238 million kilometers) on its odometer in the process.

Over the course of 39 launches, Discovery carried 246 people into space, according to NASA officials. Returning home on the shuttle with Lindsey were pilot Eric Boe and mission specialists Alvin Drew, Steve Bowen, Nicole Stott and Michael Barratt.

NASA is bringing its 30-year space shuttle program to an end later this year to focus on exploration beyond low-Earth orbit.

After Discovery lands, the orbiter will begin a months-long decontamination process to ensure that it is safe for public display in a museum

The shuttle Endeavour is scheduled to roll out to the seaside Launch Pad 39A tomorrow night beginning at 8 p.m. EST (0100 March 11).