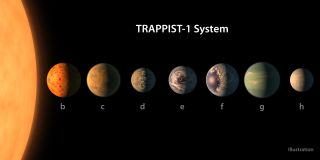 This artist's illustration shows what the seven TRAPPIST-1 planets may look like, based on available data about their diameters, masses and distances from the host star.
(Image: © NASA/JPL-Caltech)

The discovery of seven Earth-size worlds circling a nearby star could be a watershed moment in humanity's quest to find alien life, scientists say.

On Wednesday (Feb. 22), an international team of astronomers announced that seven planets about the size of our own orbit TRAPPIST-1, a tiny, cool star that lies just 39 light-years from Earth. Three of these planets orbit in the star's "habitable zone," where lakes, rivers and oceans could exist on a world's surface, but all seven could potentially harbor surface water, given the right atmospheric conditions, discovery team members said.

"With this discovery, we've made a giant, accelerated leap forward in the search for habitable worlds, and life on other worlds, potentially speaking," Sara Seager, a planetary scientist at the Massachusetts Institute of Technology, said during a news conference Wednesday. [Images: The 7 Earth-Size Worlds of TRAPPIST-1]

The find is exciting for several reasons, according to Seager, who is not part of the discovery team. First of all, with multiple potentially water-bearing worlds, the TRAPPIST-1 system is a promising candidate to host life — even if researchers don't have a completely accurate understanding of its habitable zone (also known as "Goldilocks zone").

"You could say, colloquially, it's like in this planetary system, Goldilocks has many sisters," Seager said.

Furthermore, about 15 percent of the stars in the sun's neighborhood are ultracool dwarfs like TRAPPIST-1, which is only slightly larger than Jupiter. Many of these nearby dwarfs may host rocky, potentially habitable planets, if TRAPPIST-1 is any guide.

"With this amazing system, we know there must be many more potentially life-bearing worlds out there, just waiting to be found," Seager said.

Finding such worlds is just the beginning. TRAPPIST-1 is close enough to Earth that astronomers will soon be able to characterize the seven planets' atmospheres in detail — a key step in gauging the worlds' habitability — and probe them for oxygen, ozone, methane and other potential signs of life. Indeed, NASA's $8.8 billion James Webb Space Telescope will likely start doing just that shortly after it launches in late 2018.

"We could see results in the early 2020s," said Nikole Lewis, an astronomer at the Space Telescope Science Institute in Baltimore. Lewis is not part of the TRAPPIST-1 discovery team, either, though she was co-leader of a group that used NASA's Hubble Space Telescope to begin studying the atmospheres of two of the planets in the system. (Researchers first announced the detection of three planets around TRAPPIST-1 in 2016; the new discovery confirmed two of those previously spotted worlds, and bumped the total planet tally to seven.)

Three huge ground-based observatories scheduled to come online in the early to mid-2020s — the European Extremely Large Telescope, the Giant Magellan Telescope (both in Chile) and the Thirty Meter Telescope (in Hawaii) — should also be able to study the atmospheres of nearby planets such as the TRAPPIST-1 worlds, the builders of the telescopes have said.

There should be many planets for them to investigate. For example, the team behind the new TRAPPIST-1 discovery will soon begin hunting for planets orbiting 1,000 nearby ultracool dwarfs, in a project called SPECULOOS (Search for Habitable Planets Eclipsing Ultra-cool Stars). And in 2018, NASA plans to launch the TESS (Transiting Exoplanet Survey Satellite) mission, which agency officials have said will likely find thousands of worlds circling stars in the sun's neck of the woods.

"TRAPPIST-1 is the most exciting one so far, but we hope to have many more of these, and lots of chances to find signs of life in the future," Seager said.