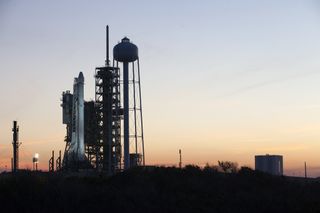 CAPE CANAVERAL, Fla. — The private spaceflight company SpaceX is counting down to the launch of a landmark delivery flight for NASA today (Feb. 18), a mission that will leave Earth from the same site used by the first Apollo moon landing crew. If all goes well, SpaceX will also land its rocket booster at another pad nearby.

Today's liftoff, which is scheduled for 10:01 a.m. EST (1501 GMT), will be a historic one for sure. It is SpaceX's first Falcon 9 rocket flight from the historic Launch Pad 39A here at the Kennedy Space Center under a lease the company has with NASA. Pad 39A is best known as the launch site for the Apollo 11 mission, which sent the first humans to the surface of the moon, as well as numerous space shuttle missions.

You can watch the SpaceX launch live here, courtesy of NASA TV. Live webcast coverage will begin at 8:30 a.m. EST (1330 GMT). [In Photos: NASA's Historic Pad 39A from Apollo to SpaceX]

"This pad would have just sat here and rusted away in the salt air, had we not had the use agreement with SpaceX," Bob Cabana, a former NASA astronaut and current director of NASA's Kennedy Space Center said during a news conference.

"What an awesome use of a great American asset," he explained. "I've got to admit, I'm a little partial Pad A. All four of my flights went off this pad."

The NASA cargo is packed up in a SpaceX Dragon spacecraft, which will be launched atop a Falcon 9 rocket. The cargo capsule is loaded with nearly 5,500 lbs. (2,500 kg) of crew supplies and science investigations, including a batch of Methicillin-resistant Staphylococcus aureus (aka MRSA), which will be used to help scientists develop new medicines to treat antibiotic resistant organisms. The cargo capsule is also carrying a crew of live mice, "mousetronauts" if you will, that are part of a study on how microgravity affects wound healing.

On Friday afternoon, SpaceX President and Chief Operating Officer Gwynne Shotwell confirmed at the briefing that SpaceX is investigating a small helium leak in the second stage spin system. The leak involves a redundant system that is involved in deorbiting the rocket's second stage. By late Friday, the issue appeared to have been resolved.

Following liftoff, the Falcon will race skyward as the first stage burns for approximately 2.5 minutes, before it begins to drop back down to Earth and — if all goes according to plan — gently lands upright on a designated landing pad. If the booster sticks the landing, it will mark the first daytime landing at the company's Landing Zone 1 (LZ-1). The first stage should touch solid ground just eight minutes after launch.

Today's launch will employ an upgraded flight termination system (FTS) — which is designed to terminate the flight by exploding the rocket should something go awry and the rocket veers off course. Previously, a human operator would decide if the flight needed to be terminated.

"This is the first flight [for which] the new technology will be the primary system. We've flown it on several missions in shadow mode," Shotwell said during the news conference.

When asked how he felt as an astronaut about making the launch termination system completely autonomous, instead of relying on a human making the call, Cabana said during the news conference, "If it's done correctly, the autonomous safety system is actually safer."

Today's launch will be SpaceX's second launch of 2017. On Jan. 14, the company successfully launched 10 satellites for the Virginia-based company Iridium from Vandenberg Air Force Base in California. This will also be the company's second launch following the explosion of a Falcon 9 rocket on the launch pad on Sept. 1, 2016.

SpaceX's next launch is expected to take place no earlier than Feb. 28, also from Pad 39A.

Editor's note: This story was updated on Feb. 20 to correct the quote attributed to Bob Cabana, NASA's director of the Kennedy Space Center. A Feb. 18 edit added the comment from Elon Musk on the Falcon 9's status.