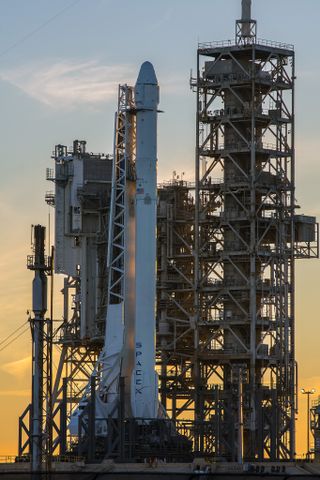 Update for 6 a.m. ET, Feb. 18: Elon Musk says SpaceX is go for launch today. In a Twitter post late Friday, he wrote: "Looks like we are go for launch. Added an abort trigger at T-60 secs for pressure decay of upper stage helium spin start system."

CAPE CANAVERAL, Fla. — All systems are "go" for tomorrow's (Feb. 18) planned launch of SpaceX's Dragon cargo capsule toward the International Space Station, even though a small leak was spotted in the rocket that will blast the freighter skyward.

"We've loaded the Dragon full of supplies, both inside and outside of the trunk. I think we're on the order of 5,500 lbs. [2,400 kilograms], and the most external cargo mass that we've ever launched in the trunk," Dan Hartman, the International Space Station's deputy program manager, said during an early evening briefing today (Feb. 17). "We're ready to go, and everything looks very, very healthy for us."

The liftoff is scheduled to take place at 10:01 a.m. EST (1501 GMT) tomorrow from Launch Complex 39A at NASA's Kennedy Space Center. You can watch the launch live here at Space.com, courtesy of NASA TV; coverage begins at 8:30 a.m. EST (1330 GMT). [Photos: The Rockets and Spaceships of SpaceX]

During a separate briefing this afternoon, SpaceX President and Chief Operating Officer Gwynne Shotwell confirmed that, while the company will keep evaluating the leak in the Falcon 9 rocket, prep for a Saturday launch will continue as scheduled.

During the early evening briefing, a SpaceX representative clarified that the leak is in the system used to re-light the Falcon 9's second-stage engine in order to propel the stage out of orbit once it has detached from Dragon.

"I was worried about an FAA [Federal Aviation Administration] launch license and weather, and both have cleared up," Shotwell added during the afternoon briefing.

That crucial license came through today, and the weather is slated to be 70 percent favorable; the Air Force's 45th Weather Squadron said the primary concern would be thick clouds above the launch site, and rain will likely not come until the afternoon. If the launch is delayed, Sunday morning (Feb. 19) has the same favorability.

After two days of flight, the Dragon cargo capsule will reach the International Space Station, where European Space Agency astronaut Thomas Pesquet and NASA astronaut (and station commander) Shane Kimbrough will grapple the spacecraft using the station's robotic arm, Canadarm2, with help from NASA astronaut Peggy Whitson, who will be monitoring the craft.

Among Dragon's supplies are more than 1,600 lbs. (730 kg) of science investigations. And when the capsule returns, after 29 days at the station, it will bring nearly 5,000 lbs. (2,300 kg) of gear back to Earth, including many experiments for scientists on the ground to analyze.

Part of the launching hardware should return much sooner than that. SpaceX plans to land the Falcon 9's first stage about 8 minutes after liftoff, bringing that stage down at "Landing Zone 1," which is located a few miles from the launch site.

Such landing attempts are part of SpaceX's effort to develop reusable rockets. To date, the company has pulled off seven successful touchdowns: two at Landing Zone 1 and five on robotic "drone ships" stationed in the ocean.

"I get more nervous for launch than landing," Shotwell said. "Launch is critical. It's for the customers. It's the primary mission. Landing is really to increase our knowledge base and bolster our technology for ultimately taking people to other planets. You've got to be able to land and re-fly. Otherwise, it's a one-way trip — which we're not interested in."

SpaceX has already launched nine resupply missions to the orbiting lab under a contract with NASA. Eight of them have been successful.