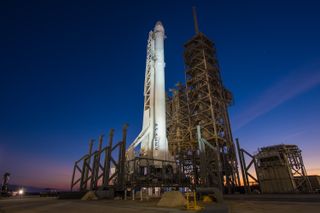 A SpaceX Falcon 9 rocket and Dragon cargo ship stand atop NASA's Launch Pad 39A for a Feb. 18, 2017 launch. It will be SpaceX's first launch from the historic NASA pad, which saw launches for Apollo moon missions, Skylab and the space shuttle program.
(Image: © SpaceX)

Update for 6 a.m. ET, Feb. 18: Elon Musk says SpaceX is go for launch today. In a Twitter post late Friday, he wrote: "Looks like we are go for launch. Added an abort trigger at T-60 secs for pressure decay of upper stage helium spin start system."

SpaceX CEO Elon Musk says his company is investigating a "(very small) leak" on the upper stage of a Falcon 9 rocket scheduled to launch Saturday (Feb. 18) to deliver NASA cargo to the International Space Station.

SpaceX President Gwynne Shotwell told reporters Friday that the issue is a helium leak on the Falcon 9 upper stage. SpaceX engineers are studying the issue and the company continues to work toward a Saturday morning launch.

"We found a helium leak in the spin system on the second stage,," Shotwell said during a press conference at Pad 39A, which SpaceX is leasing from NASA for Falcon rocket launches. "We'll continue to work root cause today and make sure we're back on track for a 10:01 (a.m.) liftoff tomorrow. As far as I know right now, we're going to proceed with the count and go into it."

The Falcon 9 is slated to carry supplies and science experiments to the space station as part of SpaceX's 10th cargo resupply mission for NASA. The mission, dubbed SpaceX-10, will also be the first SpaceX rocket to take off from Kennedy Space Center's refurbished historic Launch Pad 39A.

SpaceX-10 is SpaceX's second launch of 2017. The company successfully lofted 10 satellites into orbit for the Virginia-based company Iridium on Jan. 14. SpaceX-10 will be the second flight for SpaceX following the loss of a Falcon 9 during a launchpad test on Sept. 1, 2016.

Editor's note: Space.com staff writer Sarah Lewin contributed to this report from NASA's Kennedy Space Center in Cape Canaveral, Fla. This story was originally posted at 1:15 p.m. EST and updated to include more details on the helium leak from SpaceX's Gwynne Shotwell.