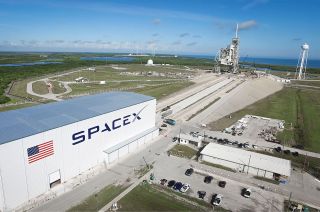 Launch Pad 39A at NASA's Kennedy Space Center in Florida seen in November 2015 as it was undergoing modifications to adapt it to the needs of SpaceX's Falcon rockets.
(Image: © SpaceX)

A SpaceX Falcon 9 rocket briefly fired its engines in a pre-flight test on Sunday (Feb. 12), marking the return to use for a NASA launch pad where astronauts historically lifted off for the moon and later leapt into Earth orbit on the space shuttle.

The three-second static fire on Launch Pad 39A at NASA's Kennedy Space Center in Florida was the culmination of a practice countdown executed by SpaceX to verify that both its rocket and the modified pad were ready for launch. The company's maiden mission from the historic NASA site will see the Falcon 9 launch with a Dragon cargo spacecraft to deliver supplies and science equipment to the International Space Station.

"First static fire test of Falcon 9 at historic launch complex 39A completed in advance of Dragon's upcoming mission to the space station," SpaceX wrote on Twitter Sunday. [SpaceX's Rockets and Spaceships in Pictures]

"This is the same launch pad used by the Saturn V rocket that first took people to the moon in 1969," wrote SpaceX's CEO Elon Musk, captioning a photo of the rocket standing on the pad that he posted to Instagram on Friday. "We are honored to be allowed to use it."

The launch complex was first built in the 1960s to support the massive Saturn V, before it was modified to launch the shuttle. The pad has to date hosted 94 launches, including 12 Saturn V rockets and 82 shuttles.

In addition to Apollo 8, the first crewed mission to orbit the moon in 1968, as mentioned by Musk, 39A also served as the departure point for Apollo 11, the first moon landing in 1969; Skylab, the first United States space station in 1973; and the first flight of the space shuttle, STS-1, in 1981.

SpaceX signed a 20-year lease with NASA for the use of Pad 39A in 2014 and since then has been modifying it to be compatible with its rockets. The Hawthorne, California-based company made structural improvements to the fixed service tower that supported the space shuttle, added new propellant, data and power lines, modified the flame trench and installed new "rainbirds" to deluge the pad with water to combat acoustic damage at liftoff.

SpaceX also erected a horizontal integration hangar at the base of the pad to process its rockets and designed a new transporter erector launcher (TEL) to move the boosters to the launch platform and stand them vertical for flight. Plans are also in place to remove the shuttle-era rotating service structure, though it was not necessary to complete prior to beginning use of the pad.

The company accelerated its preparation of Pad 39A after a Falcon 9 exploded in September 2016 in the lead up to a static fire at the nearby Complex 41 at the Cape Canaveral Air Force Station. That pad, now out of service, is currently being repaired with work expected to be complete later this spring, at earliest.

In addition to using Pad 39A to support its space station cargo missions, SpaceX also intends to use the complex to launch astronauts on its Crew Dragon spacecraft to the orbiting outpost beginning as soon as 2018, and support flights of its Falcon Heavy rocket, slated for later this year.

SpaceX's first launch from the pad will be the company's 10th under a commercial resupply services (CRS) contract with NASA.

In addition to crew supplies and equipment, the CRS-10 Dragon spacecraft will bring to the space station several science investigations, including 20 live mice for studies on what prevents vertebrates from regrowing bone and tissue; two Earth science payloads; an autonomous rendezvous technology demo; and an experiment supporting antibiotic drug development.

SpaceX now operates three launch pads and is a building a fourth. In addition to the two in Florida — Pad 39A and the under repair LC-40 — and one in southern California, Space Launch Complex 4E at Vandenberg Air Force Base, the company is also in the early stages of building a new launch pad in Brownsville, Texas.