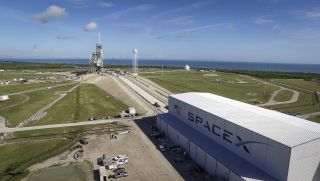 SpaceX will launch a mission from the historic Launch Complex 39A at NASA's Kennedy Space Center for the first time in mid-Februrary. The private spaceflight company modified the pad for its Falcon 9 and Falcon Heavy rockets.
(Image: © SpaceX)

SpaceX is preparing to launch its 10th cargo resupply mission to the International Space Station for NASA, which is now set for Feb. 18.

The mission will bring crucial supplies for the space station crew and materials to support more than a dozen experiments on the orbiting lab, including a new muscle cell experiment designed by high school students. It will also be the first to launch from the newly renovated, historic Launch Complex 39A at NASA's Kennedy Space Center in Florida.

The launch pad was built in the 1960s, and hosted a number of famous mission launches, including Apollo 11, which put the first humans on the moon, and the first and last space shuttle flights. SpaceX leased the pad from NASA starting in 2014.

SpaceX has modified the pad to suit its Falcon 9 and future Falcon Heavy rockets. For the Feb. 18 launch, a Falcon 9 will loft into orbit a robotic Dragon spacecraft filled with more than 5,500 lbs. (2,500 kg) of cargo, NASA officials said during a news briefing today. After its stay on the space station, the Dragon will return nearly 5,000 lbs. (2,300 kg) of cargo to Earth.

Riding to the station on this launch is an experiment by high school students at Craft Academy at Morehead State University, which will test the impact of microgravity on smooth muscle cell contraction. The experiment will use cells from rats to better understand how the muscle cells lining veins and arteries function.

Dragon will also carry an experiment monitoring the "superbug" MRSA (in a sealed experiment environment) to investigate how the bacterium grows and mutates without the pull of gravity; an experiment to grow and study antibody crystals; a "three-eyed" Raven tech demonstration system that will gather data for future autonomous rendezvous missions with satellites and spacecraft; and two Earth-monitoring systems that will sense lightning and gases in the planet's stratosphere.

The launch will also mark SpaceX's first liftoff from Florida's Space Coast since a Falcon 9 rocket burst into flames during a prelaunch test Sept. 1 at Cape Canaveral Air Force Station, which is next door to KSC.