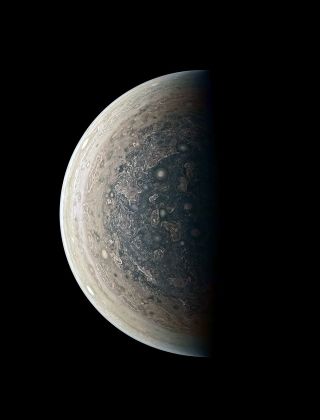 The JunoCam instrument on NASA's Juno spacecraft, circles the huge planet sending massive amounts of data back to Earth for scientific study.

The imager's raw images can be viewed and processed into images by anyone interested and many citizen scientists do just that. One such person, Roman Tkachenko, did just that with this stunning enhanced-color view of Jupiter's south pole, which NASA released on Feb. 8. [Jupiter Views Made Into Stunning Art (Gallery)]

"Juno acquired the image, looking directly at the Jovian south pole, on February 2, 2017, at 6:06 a.m. PST (9:06 a.m. EST) from an altitude of about 63,400 miles (102,100 kilometers) above Jupiter's cloud tops," NASA officials wrote in an image description. "Cyclones swirl around the south pole, and white oval storms can be seen near the limb -- the apparent edge of the planet."

Juno launched in August 2011 and arrived at the Jupiter on July 4, 2016. After orbiting the planet for 20 months, the spacecraft will plunge into Jupiter, ending its mission in February 2018.

You can access the raw images from JunoCam here, courtesy of NASA.