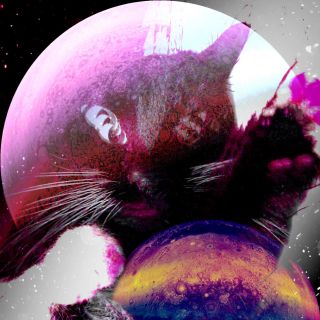 This piece, posted to the gallery section of the JunoCam website, features an image of Jupiter captured by JunoCam. The description reads: "Space cat."
(Image: © Wintje, CC NC SA )

NASA's Juno spacecraft was designed to answer fundamental questions about Jupiter, but it's also providing inspiration for artists on Earth.

The JunoCam instrument was added to the Juno spacecraft to engage members of the public by providing raw images of Jupiter that citizen scientists can download and process however they like. Many people have chosen to process the images in ways that highlight various features in the clouds of the Jovian giant.

But lately, many of the images uploaded to the JunoCam image gallery are artistic rather than scientific. Many creators have processed the images in such a way as to add incredible color to Jupiter's highly textured cloud tops. A few images have incorporated the Juno images into collages and more complex works of art, including one that involves a cat and another that mimicks a Jimi Hendrix album cover. [Jupiter Probe Images Made Into Stunning Art (Gallery)]

These artistic images are posted in the gallery section of the JunoCam website. Juno mission specialists upload the latest images to the website and make them available to the public. The website also features a gallery for people to post their processed images and a discussion section.

"It's really much more than we anticipated," Candy Hansen, a Juno co-investigator and head of the JunoCam team, told Space.com, referring to the number of artistic submissions to the gallery. "I love it. I'm not very artistic myself so when I see what other people come up with I'm just like, 'Wow! These people are so creative! Where did they get these ideas?' So I'm a big fan. "

Some of the processed images that are posted by users have detailed descriptions that give some insight into the artist's objective or the process he or she used to create the image. Other image descriptions are extremely simple or nonexistent — the description for an image featuring a giant cat reaching out for Jupiter as if it were nothing but a toy mouse said only "Space cat." The simpler descriptions inspire viewers to guess what motivated the artist and to interpret the meaning of a particular work themselves.

A trip to Jupiter

Juno is flying closer to Jupiter than any spacecraft in history — coming to within about 2,670 miles (4,300 kilometers) of Jupiter's cloud tops on its most recent flyby — so the images that it sends back give observers a more detailed look at the Jovian giant than they have ever seen before.

The JunoCam instrument takes images in optical light (the kind that's visible to the human eye), and it was added to the spacecraft specifically for outreach purposes rather than as part of the main scientific payload, according to Juno team members.

On the JunoCam website, users can suggest locations on Jupiter's surface that JunoCam should photograph during the probe's next close flyby of the planet. (Right now, the Juno spacecraft makes a close flyby of Jupiter every 53 days.) During designated time periods, members of the public can vote on which Jupiter locations they'd like to see photographed by JunoCam. The latest voting period ended on Jan. 23. Fifteen locations were selected for JunoCam to photograph during the flyby on Feb. 2.

The primary science objective of the Juno mission is to look into Jupiter's internal composition and its water content, which will help scientists understand its history and formation as well as help to illuminate the larger history of the solar system. Other instruments aboard Juno will provide scientists with information about the internal structure of Jupiter and will use specific wavelengths of light to probe beneath the cloud tops that JunoCam sees. Shortly after Juno's first flyby of Jupiter, Scott Bolton, Juno's principal investigator, told reporters that although JunoCam was not intended to be part of the primary science payload, the images have already provided new insights about the environment that contains Juno's cloud tops.