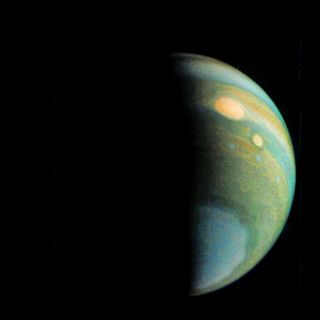 This false-color view of Jupiter's polar haze was created by citizen scientist Gerald Eichstädt using data from the JunoCam instrument on NASA's Juno spacecraft. The image was taken on Dec. 11, 2016, when the spacecraft was 285,000 miles (459,000 kilometers) from Jupiter.
(Image: © NASA/JPL-Caltech/SwRI/MSSS/Gerald Eichstadt)

NASA's Juno spacecraft has flown by Jupiter for the fourth time.

All eight of Juno's science instruments were on and collecting data during the flyby if all went according to plan, they added.

Juno launched in August 2011, on a $1.1 billion mission to learn more about Jupiter's composition, magnetic field and interior structure, including whether or not the gas giant harbors a solid core. The probe arrived at Jupiter on July 4, 2016.

Juno is in a highly elliptical orbit that brings it close to the gas giant just once every 53 days. Most mission-relevant data is gathered during these flybys, the previous three of which occurred last August, October and December.

Though mission scientists are still analyzing the information collected during these previous encounters, they have already learned some interesting things.

"Revelations include that Jupiter's magnetic fields and aurora are bigger and more powerful than originally thought and that the belts and zones that give the gas giant's cloud top its distinctive look extend deep into the planet's interior," NASA officials wrote in a statement today. "Peer-reviewed papers with more in-depth science results from Juno's first three flybys are expected to be published within the next few months."

Juno was originally supposed to shift into a 14-day orbit in October, but an issue with engine valves caused mission controllers to call off a planned thruster firing that would have made that happen. The Juno team is still investigating the possibility of moving the probe onto a shorter orbital path, NASA officials said.

Juno's mission is scheduled to end in February 2018 with an intentional death plunge into Jupiter's thick atmosphere.