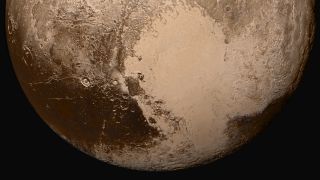 Mysterious dark reddish spots along Pluto's equator may be the aftermath of the giant impact that helped form the dwarf planet's largest moon Charon, a new study finds.

One of the most striking features of Pluto that NASA's New Horizons probe photographed during its July 2015 flyby is the dark reddish material found in giant spots along the dwarf planet's equator. The biggest example of these patches is the region informally known as Cthulhu (pronounced "k-thu-lu"), which stretches nearly halfway around Pluto's equator. [See more amazing Pluto photos by New Horizons]

These dark reddish spots may contain organic matter — specifically, tar-like materials known as tholins. It remains uncertain how these patches were created. While comets might have scattered tholins onto Pluto's surface, or light or high-energy radiation could have chemically reacted with the dwarf planet's surface to create these compounds, both of these activities would have darkened the dwarf planet's surface. That, however, is not consistent with the presence of bright water-ice bedrock seen there.

Now, researchers in Japan suggest this dark reddish material was created by the giant collision that may have given birth to Charon. Just as Earth's moon likely arose from the debris of a Mars-size body's crash into the newborn Earth, so has previous work proposed that Charon was the result of a cosmic impact.

The scientists said that both Pluto and whatever struck it likely contained simple organic compounds typically found in comets, such as formaldehyde. They also reasoned that these molecules may have made their way into temporary pools of warm liquid water that would likely have existed after the impact melted a significant part of Pluto's surface.

In lab experiments, the researchers heated soups of water and simple organic compounds such as formaldehyde for many hours. The concentrations of the organic molecules in these solutions were comparable to those found in comets.

The scientists found these soups became darker and redder over time as complex organic compounds formed. After heating for more than 1,000 hours at 122 degrees F (50 degrees Celsius) or greater, they resembled the material in Pluto's mysterious equatorial dark spots.

In computer simulations, the researchers found that an impactor one-third Pluto's mass colliding with a Pluto-size object could have generated a Charon-size moon and "warm, liquid-water pools near the equatorial regions of the Pluto-sized object," said study lead author Yasuhito Sekine, a planetary scientist at the University of Tokyo. (The impact is strong enough to significantly tilt the Pluto-size object, such that the point of impact controls where the dwarf planet's new equator lies, and the warm pools form along the equator.)

The researchers suggest that in the warm pools of liquid water that would have temporarily existed after the impact, simple organic molecules from either Pluto, the impactor or both could have formed more complex organic materials, such as tholins. Therefore, the Cthulhu region and the other dark reddish spots on Pluto may be "a smoking gun of the giant impact origin of Charon," Sekine told Space.com.

The researchers suggest that high-speed giant impacts may have occurred frequently in the outer regions of the ancient solar system. These collisions may explain the mysterious variety of color, brightness and density seen in large objects in the Kuiper belt, Sekine said.

The scientists detailed their findings online today (Jan. 30) in the journal Nature Astronomy.