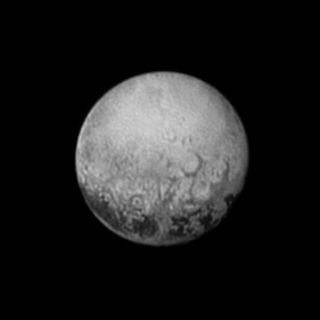 New Horizons imaged the patches on Saturday (July 11), from a distance of 2.5 million miles (4 million kilometers). The dark spots lie on Pluto's far side, which always faces the dwarf planet's largest moon, Charon. New Horizons won't be able to see the far side when it zooms through the Pluto system during its highly anticipated flyby on Tuesday morning (July 14), mission team members said.

The new photo is "the last, best look that anyone will have of Pluto’s far side for decades to come," New Horizons principal investigator Alan Stern, of the Southwest Research Institute in Boulder, Colorado, said in a statement.

The four dark patches, each of which is about 300 miles (480 km) wide, link up with a larger dark belt that circles Pluto along the equator. The spots' regular spacing and similar size continue to puzzle mission scientists.

"We can’t tell whether they’re plateaus or plains, or whether they’re brightness variations on a completely smooth surface," Jeff Moore, of NASA’s Ames Research Center in Moffett Field, California, said in the same statement.

"When we combine images like this of the far side with composition and color data the spacecraft has already acquired but not yet sent to Earth, we expect to be able to read the history of this face of Pluto," added Moore, who leads New Horizons' geology, geophysics and imaging team.

The probe will gather a variety of data using its suite of seven science instruments, finally lifting the veil on Pluto, which has remained largely mysterious since its 1930 discovery.